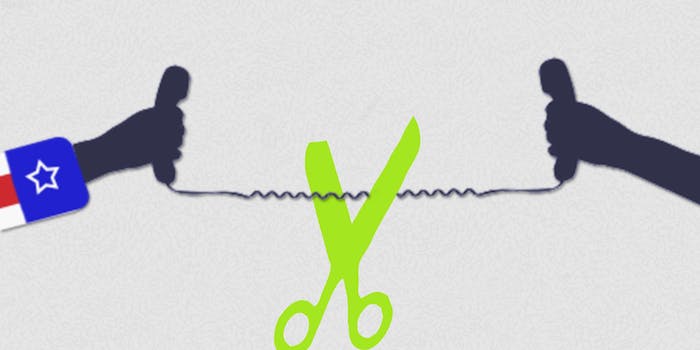 The Electronic Privacy Information Center (EPIC) is directly petitioning the Supreme Court to protest the intelligence agency's practice of tracking every single Verizon call made in America.

One legal advocacy group is so fed up with the NSA spying on Americans, it’s headed straight to the top.

The Electronic Privacy Information Center (EPIC) is directly petitioning the Supreme Court to protest the intelligence agency’s practice of tracking every single Verizon call made in America, filing the paperwork Monday.

It’s an “extraordinary legal step,” according to the New York Times, but these are extraordinary circumstances. As EPIC states, it’s the very nature of how the NSA gets this information that forces them to go to the Supreme Court.

The NSA’s bulk surveillance works under what’s called a Foreign Intelligence Surveillance Act (FISA) Court. FISA is a shadowy, separate American court system created to oversee intelligence agencies’ legal activity. Its defining attribute is that its rulings are inherently classified—hey, it’s a matter of national security—and that’s precisely why it’s so hard for a group like EPIC to sue over everyone’s phone calls being traced. From EPIC’s announcement (“FISC” stands for “FISA Court”):

In this case, EPIC cannot [seek] relief from any other court other than the Supreme Court. Normally, when a court issues an unlawful order, the adversely affected parties can intervene or appeal to a higher court. However, the FISC and Foreign Intelligence Surveillance Court of Review only have jurisdiction to hear petitions by the Government or recipient of the FISC Order. Neither party to the order represents EPIC’s interests. As EPIC is not a recipient of the order, it cannot challenge it in the FISC. Other federal and state trial and appellate courts have no jurisdiction over the FISC, and therefore cannot grant relief.

Evidence of those Verizon calls were the first of a number of leaks made by Edward Snowden, the former NSA contractor who left the country to expose those practices. But while government officials have denied that the U.S. actively surveilles Americans’ Internet activity, they haven’t denied that they store the metadata of everyone’s Verizon phone calls. President Obama, in an interview with Charlie Rose soon after the leaks, admitted to and refused to condemn the practice.

But EPIC argues that collecting all Americans’ calls is a violation of FISA’s wording. “It is simply unreasonable to conclude that all telephone records for all Verizon customers in the United States could be relevant to an investigation,” the group announced.

Meanwhile, the EFF won a minor victory in its own legal battle against NSA secrecy. Its suit, Jewel v. NSA, attempts to stop the NSA’s practice, revealed by former AT&T employee Mark Klein, of tracking all AT&T customers’ communications. The NSA had challenged the case on the grounds that it might reveal information that damages national security. However, a district judge dismissed the NSA’s objection Monday, allowing the EFF’s case to continue.