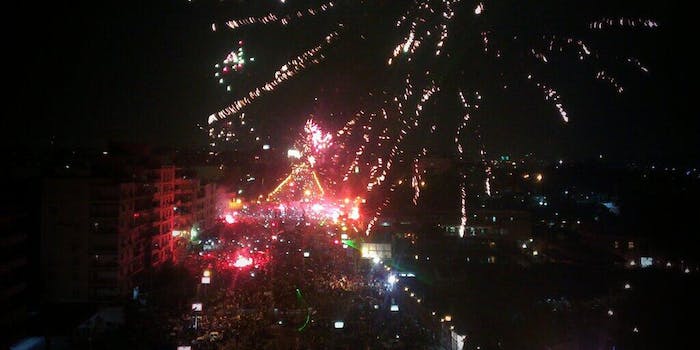 Egyptian Revolution 2.0: Morsi is out

On YouTube, we watched a revolution happen in real time.

As the Egyptian army’s deadline passed for Mohamed Morsi to resolve the mass protests against his government, the military told Morsi he was no longer the country’s president.

The news was first reported by state-run Al-Ahram, before the head of the armed forces General Abdel Fattah al-Sisi confirmed Morsi had been overthrown in a televised statement. He claimed the army had been calling for a national dialogue, but the presidency had rejected the calls.

And here’s his Wikipedia page. What else do you need to know?

The army has suspended the constitution, while the Chief Justice has been declared interim president until parliamentary and presidential elections can take place. A technocratic government will be formed in the interim.

Watch it happen in real time:

Hundreds of thousands of Egyptians in Tahrir Square, the focal point for protests since the revolution began in Jan. 2011, celebrated with fireworks as the news came out.

Troops were stationed around the office from which Morsi was working Wednesday while armored vehicles blocked roads to the presidential palace and appeared on the streets in Cairo.

Egyptian soldiers praying on the Jemaa bridge across the nile River at sunset in Cairo. pic.twitter.com/aPOXkTFxMB

Amid uncertainty and violence, the party line from the Muslim Brotherhood, with which Morsi’s Freedom & Justice Party has strong ties, is resolute: This is a military coup.

Essam al-Haddad, a key Morsi advisor on foreign affairs matters, posted a statement on Facebook in which he warned of bloodshed, while conceding it may be the last opportunity he has to update his Facebook page while in office.

“There are still people in Egypt who believe in their right to make a democratic choice. Hundreds of thousands of them have gathered in support of democracy and the Presidency. And they will not leave in the face of this attack,” he wrote. “To move them, there will have to be violence. It will either come from the army, the police, or the hired mercenaries. Either way there will be considerable bloodshed. And the message will resonate throughout the Muslim World loud and clear: democracy is not for Muslims.”

Muslim Brotherhood spokesman and an advisor to the Freedom & Justice Party, Gehad El-Haddad, concurred with the coup argument and claimed his social networking accounts were under attack.

There is a FULL MILITARY COUP under way now in #Egypt. Tanks hv started moving thru the streets. #Egypt #SaveEgypt

All my accounts on the internet (Facebook, Twitter, Linkedin, Gmail) r being hacked at the same time !!

On the other side, there are arguments that the military action cannot possibly be a coup, since Morsi being ousted is the will of the majority of people and therefore is democracy in action. More than 22 million people reportedly signed a petition calling for Morsi’s departure, while millions have taken to the streets to demand his exit this week.

Those are the amazing people of Egypt military is just supporting us #EgyptianRevolutionNotMilitaryCoup pic.twitter.com/ZpVqeHjoCg

Do you want to know who toppled Morsi? It was not the military. It was this: pic.twitter.com/BBHEUa1Icc

Whether or not the action is deemed to be a coup is important, as the U.S. will by law need to halt aid until a democratically elected government is in place, according to Al Jazeera English.

Elsewhere, Egyptians are urging the U.S. government to keep out of the country’s politics. The creator of the #MindYourBusinessUS tag claims he was blocked by Twitter for a spell after it started trending.

Twitter blocked me and blocked the hash tag when it started trending, thats not censorship, thats US democracy #MindYourBusinessUS

Dear Americans, if you want to know what Egyptians think of your government check this hashtag #MindYourBusinessUS

Following reports the military had fired on Morsi supporters, the army denied the claims in a statement on Facebook. “These allegations are entirely false, mere lies and fabrications,” it said. “They come in the framework of achieving certain suspicious political objectives.

Meanwhile, an appeals court upheld a decision to relieve Morsi’s Prime Minister Hisham Qandil of his duties and sentence him to a year in prison. He was convicted for failing to carry out a verdict ordering “the reinstatement of employees at Tanta Flax and Oil Company and for annulling the company’s sale to a Saudi businessman,” Ahram Online reported.