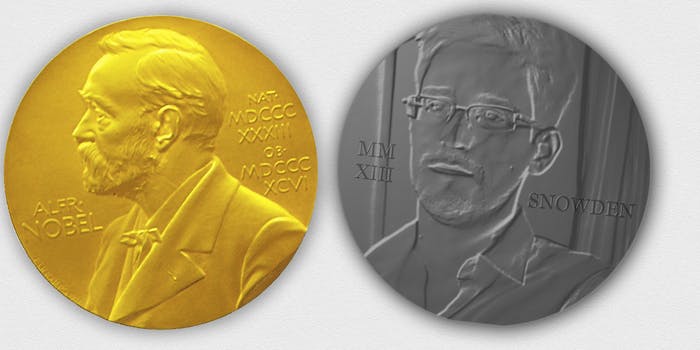 Stefan Svallfors, a sociology professor at Sweden's Umeå University, nominated NSA whistleblower Snowden for the 2014 edition of the prestigious award.

Edward Snowden, alternately hounded and ignored by world governments but praised by the public as a whistleblowing hero, has been nominated for a Nobel Peace Prize.

Stefan Svallfors, a sociology professor at Sweden’s Umeå University, tweeted a screengrab of his letter to the Nobel Committee on Saturday. According to RT’s translation of the letter, Svallfors said Snowden showed “heroic effort at great personal cost” when the former NSA contractor fled his country, possibly for good, with a host of file that illustrate the agency’s vast Internet and phone spying practices.

The list of who can nominate someone for a Nobel Peace Prize is broad, and includes sociology, history, law, and theology professors.

Fellow whistleblower Bradley Manning, who’s currently on trial for leaking army documents to Wikileaks—and who, like Snowden faces charges of espionage—was nominated for the Prize in 2012, and again this year.

The nomination is too late to count for 2013. The deadline is February each year, so Snowden only has a chance in 2014.

Svallfors noted in his letter that awarding the prize to Snowden would “help to save the Nobel Peace Prize from the disrepute incurred by the hasty and ill-conceived decision to award US President Barack Obama 2009 award.”

Obama received the award ten months into his presidency. Though he once called to overturn the secret FISA courts that provide the legal basis for much of the NSA’s surveillance practices, he formally switched his position in 2008, and recently has defended those practices.

Snowden, meanwhile, remains stuck in the international zone of Moscow’s Sheremetyevo airport. Though he said Friday that he would apply for temporary asylum in Russia, Russian president Vladimir Putin said Monday that he hadn’t yet received a formal request.