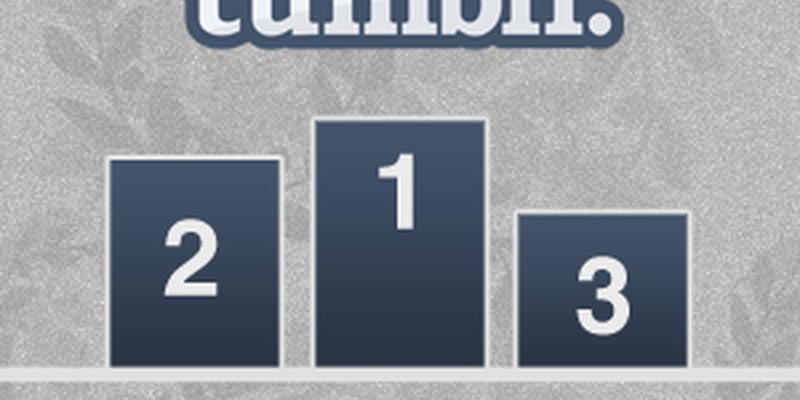 Tumblr emerged in 2011 as the way to make your blog viral. Here are the 10 most contagious accounts we know.

The Daily Dot is the hometown newspaper for the Web’s varied communities. Today, we take a look at the top members of Tumblr, a blogging society that came into its own this year.

For those people who find long-form blogging too daunting and tweets too monotonous, Tumblr has been the platform of choice in 2011.

The four-year-old media-blogging platform had a record year, collecting its 10-billionth post about three months ago. Each month, Tumblr visitors spend more than 10 million hours on the site. And on Oct. 21, President Barack Obama moved into the neighborhood.

And yet while Tumblr has achieved an unparalleled amount of success in 2011, its ease of use has been its greatest asset and challenge. Tumblr blogs literally take seconds to create, thanks to ready-made themes and layouts that can easily be tweaked with a few clicks of the mouse. And if original content is something you are lacking, Tumblr’s reblog feature allows you to simply redisplay other bloggers’ posts.

While these features make the platform very easy to use and lowers the bar for blogging, it hardly encourages creativity. Why come up with your own blog design or your own posts when you can just copy someone else’s?

That superficial critique, though, misses all the action. Some Tumblr users contribute original material that their followers reblog. Others curate and collect the best of Tumblr and the rest of the Web. Tumblr’s media-friendly format lets people tell stories and convey emotion with pictures, links, and quotes—not the gray blobs of text that dominated first-generation blogging tools.

Because Tumblr users are not required to reveal how many followers they have, and Tumblr does not make  that information public, there are no hard stats on which to base our list. But never fear. While our list may be subjective, we believe the following users have had profound influence on art, news, comedy, design—and even politics.

#1
We Are The 99 Percent For the People, by the People

No other Tumblr blog has captured the world’s attention like We Are The 99 Percent. At the height of the Occupy Wall Street movements this fall, the blog was flooded daily with images of Americans and citizens of other countries alike, drowning in debt, facing homelessness, working long hours for terrible pay, and “getting nothing while the 1 percent is getting everything.”

The blog has drawn both criticism and support, and inspired blogs with different political persuasions. Yet through it all, We Are the 99 Percent has taken a prime position in America’s debate about its financial and political systems.

“It can be frustrating to see people with problems who won’t take up the solutions that you understand to be the right ones, to see bad choice after bad choice multiply into something uncontrollable,” said Chris, the blog creator, in a Daily Dot interview. ”There are people like that out there, who won’t take responsibility for their lives and won’t make a good, honest effort to improve their situation. But for every one like that, there are 10, 20, 30 who did everything right—who got an education in a field where there is demand, who work hard, who sacrifice, who want nothing more than a hot meal and a warm bed and a doctor to go to when they get sick—and still get nothing to show for it.”

Using a voice-dictation program, Shane Burcaw, 19, has given the world an intimate look at what it’s like to live with muscular dystrophy. In just six short months, Burcaw’s blog has collected 25,000 followers eager to see where life takes this aspiring journalist. Laughing At My Nightmare is a perfect blend of humor and seriousness, with Burcaw using text, video and photos to capture every detail of his life.

“I’m not ever going to say that it’s my mission or my life goal to inspire people or change people’s lives with my blog, because that would be a straight up lie,” Burcaw told the Daily Dot about three months ago. “However, if I inspire people along the way, I think that’s pretty awesome too.”

If Tumblr rankings were determined by laughs per post, The Frogman would rocket to the top.

The Frogman is 30-year-old Tumblr sensation Benjamin Grelle, a Web humorist whose GIF animations and photos have left thousands of people on Reddit and The Daily What in stitches. In just two short years, Grelle’s blog has collected a huge following, averaging 30,000 pageviews a day. That can soar to 200,000 when one of his posts goes viral.

“The response I’ve gotten from this, the love from all the people, it’s changed my life,” said Grelle, who sufferers from chronic fatigue syndrome, in a Daily Dot interview. “I was a depressed lump before this. Everyday I get dozens of messages of people saying wonderful things. It gets you through the days.”

After being named “the undisputed king of Tumblr” in October by the New York Times, Anthony De Rosa and his Soup blog have continued to be a force to reckon with on the blogging platform.

De Rosa, the social media editor for Reuters by day, regularly posts funny and insightful photos from around the Web, adding in a bit of commentary where appropriate. The posts range from a video of a police officer pepper spraying Occupy Wall Street protesters to a photo of the “It’s Always Sunny in Philadelphia” cast.

Of all the tags used on Tumblr, none are more popular than “GIF.” That ancient image format is still popular for its ability to present simple animations. The GIF tag provides a gateway into a world of amusing moving pictures. And sitting at the top of this animated mountain is Mr. GIF, a three-person animation factory from New York and New Jersey. In nine short months, they’ve earned the Top Editor position on the popular tag.

An early Tumblr adopter, Kate of Kateoplis has set herself apart as one of its top news bloggers. For the last three years, Kateoplis has been home to some of the most politically charged images, quotes, and charts, earning Top Editor position on Tumblr’s News tag. Kate herself is elusive, providing little information about herself on Tumblr, Flickr, and Twitter. But nonetheless, her news-aggregating prowess has earned her Tumblr fame.

Everyone remembers creating bar graphs and pie charts in grade school. Today, most of the charts you look at are dull Excel output. But one Tumblr blog, I Love Charts, has become ground zero for beautifully made charts that aren’t always about the numbers.

The charts cover topics from high school popularity and Santa’s naughty list to the Occupy Wall Street movement. The two guys behind the blog are Cody Westphal and Jason Oberholtzer, 25 (Oberholtzer is a squeaky-clean, tie-wearing New Englander who also dabbles in Twitter rap battles.) The I Love Charts blog has gotten so popular the guys have signed a book deal featuring the best user-submitted charts. The book is due out sometime in 2012.

For the last 16 years, Laughing Squid has been aggregating and creating some of the most interesting images, videos, and animations around the web. Founded by Scott Beale in San Francisco, Laughing Squid has collected numerous awards for its creativity. Although its Tumblr mostly links to articles from its official blog, almost every one collects upwards of 500 notes from art- and technology-addicted Tumblr users.

In real life, Ryan Gosling is a laidback actor who starred in films like “The Notebook,” “Blue Valentine,” and “Drive.” On Tumblr, he’s a meme-generating sensation where more than three dozen blogs have been created in his name. At the Daily Dot, we’ve dubbed them “Gosblrs.”

Each Gosblr has its own unique theme but all follow the same format. They each feature candid or staged photos of Gosling with funny text written off to the site. Our own Jordan Valinsky has created a Gosblr Tumblr featuring the best Gosling inspired blogs.

Sex and the City’s Carrie Bradshaw has nothing on 19-year-old Tumblr phenom Yana.

On her blog, Bergdorf Princess, Yana publishes gorgeous fashion and lifestyle photos for visitors to sink their teeth into. Most posts lack any sort of explanation or text, which doesn’t seem to bother the thousands of visitors who like, comment and reblog almost every blog entry.