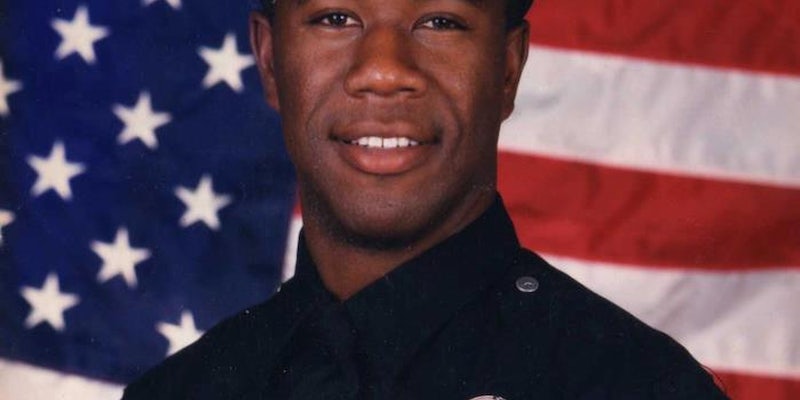 Christopher Dorner is not alone. Monday morning Joe Jones, another disenchanted African-American ex-LAPD officer, came forward with a Facebook manifesto attesting to systematic racism and corruption at the force, and calling for immediate action by both police and civilians.

“Unlike Former Officer Dorner, I fear dying; But I also fear living in a society where Innocent people are dying for no reason. A society where pain so great can be afflicted to people who have to desire to live right and treat people right and then be punished for doing right,” he wrote.

The document, headed by a portrait of Jones in his uniform, quickly went viral, garnering almost 300 comments and being cross-posted to Twitter by Anonymous and the OccupyThePolice website. (It’s now deleted or set to private on Facebook.)

Unlike Dorner, Jones calls for peace, explicitly repudiating murder as an act of conscience, and pointing out that the young couple whose shooting was allegedly the beginning of Dorner’s shooting spree were entirely innocent of any of the crimes against him that tormented Dorner. But he also attested to the reality of institutionalized racism and brutality on the force.

Just like former Officer Christopher Dorner I used to smile a lot. I loved everyone. I was voted Friendliest Senior of my Sr. Class in High School. I always believed in the system and never got into any trouble. I loved hard and gave to all I could. After Joining the LAPD in 1989 I quickly found out that the world and society had major flaws. I had flaws as well for ever believing that our system of government was obligated to do the right thing.

He outlines multiple incidents against himself and his family, saying that he ultimately couldn’t reconcile being a cop with doing the right thing. “I was falsely accused on more than one occasion and simply placed in a position that the trust was so compromised that I could no longer wear the Uniform.”

He told the LA Weekly that his complaint about one incident in which he was handcuffed and “proned” for a minor traffic violation went nowhere after the officers who’d originally agreed to testify for him suddenly dropped out. His claims of systemic racist abuse in the LAPD were backed up by “Ben,” an acquaintance of Dorner’s who was interviewed on KPFA’s Hard Knock Radio yesterday. Ben requested a pseudonym because he says he “has an interest in raising my children” and sees taking on the LAPD without cover of anonymity as directly antithetical to that.

Jones’s post is fundamentally different from Dorner’s, although it too has gone viral. The surge of support comes perhaps in response to people’s second thoughts about supporting Dorner, someone who, however he started out, and however he perceives of himself, has apparently ended up a cold-blooded killer. The world still needs heroes when it becomes disenchanted with the old ones, after all. Jones advocates peaceful reform and a cessation of violence both on the part of Dorner and the LAPD. All proper manifestos have a list of demands, and Jones’s is no exception, although the demands are fundamentally, even profoundly law-abiding.

For the bereaved to find “the peace that only God can give at this terrible time.” For civilians to obey police commands immediately, “so that you are not the victim of an Officer on high alert.” For lawmakers to guard the truth and protect whistleblowers, and not to stop their ears to talk of destructive conspiracies, which may exist within our social institutions. For honest police everywhere to stay safe, to keep the people safe, and insofar as possible retain morale in the face of “Bureaucratic drama and stress.” For bad cops to pray for forgiveness and to change their actions, effective now, and to put themselves in the other person’s place.

And, lastly, for Christopher Dorner: That Jones understands his pain, but that killing is never the right way. “I lost my Career, I lost my Family, I lost my Dignity, I lost my Trust…But I am here now to hopefully one day see change…Bro, Don’t kill anymore Innocent people. Refrain from any further wrong doing and do what you must to salvage your Soul.

“Just remember that God is a forgiving God.”