Ask.fm cyberbullies claim the life of another teen

What do these six teens, aged between 13 and 16, have in common? They all committed suicide in the last six months after being bullied on anonymous social network Ask.fm.

With more than 40 million users, mostly operating under pseudonyms, the Latvia-based website is a breeding ground for cyberbullying and stalking, much like Formspring, the site it was modeled upon.

Now, the friends and family of 16-year-old suicide victim Anthony Stubbs say they’ve come under attack from anonymous bullies on the website.

Stubbs, who had been missing since November, was found hanged in the woods outside Lancashire, England, in January, along with a farewell note. His suicide was initially attributed to school bullying regarding his alleged bisexuality. But now his family is speaking out against Ask.fm and enlisting local MP Ben Wallace to their cause. The news comes just after Unsworth, another Lancashire teen, was driven to suicide by Ask.fm bullies. Unsworth’s suicide came even as he was struggling to educate and support other teens who were facing cyberbullying, like himself. He promoted anti-bullying messages on YouTube, while being viciously bullied himself on Ask.fm.

A movement to warn and educate parents and teens about the dangers of using Ask.fm has long been underway. In June of 2012, a Scarsdale, N.Y., middle school sent parents a warning notice about the website. In the wake of Gallagher’s death, teen advocacy website SpunOut released a series on how to protect yourself against cyberbullying. After Laney’s December suicide, the clamor from the media and anti-bullying advocates for Ask.fm to shut down or to take drastic measures to reduce the rampant instances of trolling, harassment, and cyberbullying on its pages grew intense. Currently, a Facebook page asking for Ask.fm to be taken offline has more than 8,000 likes. 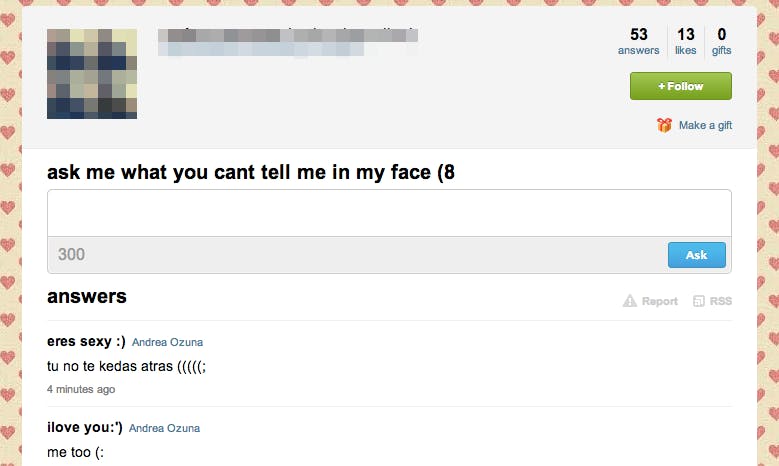 In January, Irish Children’s Minister Frances Fitzgerald instructed Latvian officials to investigate Ask.fm and find out why it has so few cyberbullying prevention measures built into the site. Latvian founder Mark Terebin has been disingenuous on the subject of his website’s role in the ongoing tragedy of teen suicide. Following Pugsley’s death, he blamed U.K. teenagers for being “more cruel” than teenagers from other countries:

Of course there is a problem with cyberbullying in social media. But as far as we can see we only have this problem in Ireland and in the United Kingdom most of all, trust me. There are no complaints regarding cyber bullying from parents, children or other sources in other countries. It seems that children are crueler in these countries (Ireland and the United Kingdom).

While it’s true that the U.K. has been hit harder than most other regions by Ask.fm suicides, Laney was from Florida. Other recent suicides connected to online cyberbullying include two Canadian teens, Amanda Todd and Rehtaeh Parsons. Both girls were targeted by their peers after being exposed to online sexual harassment.

But Terebin insists that Ask.fm is “just a tool.” Ask.fm’s Terms of Service does have a clause in place that forbids the user to engage in “unlawful, harassing, libelous, abusive, threatening, harmful, vulgar, obscene or otherwise objectionable material,” or behavior that encourages the physical harm of any individual or group. But as long as his website maintains its commitment to anonymity, little can be done to police the many teens who use it. Even Fitzgerald admits that due to the “global and open nature of the Internet,” putting a halt to virtual cyberbullying may be difficult.

And given that Ask.fm has more than doubled its userbase in the last six months, it doesn’t look like that will happen any time soon.