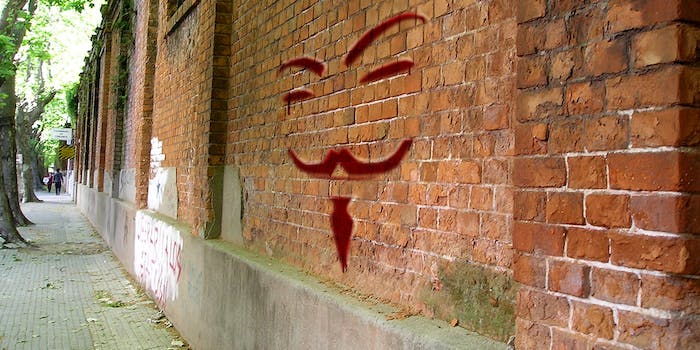 nonymous has declared cyberwar on the governments of Singapore, the Philippines, and Indonesia.

Is an Asian Autumn happening online via Anonymous?

In anticipation of the worldwide Million Mask March on Nov. 5, Anonymous has declared cyberwar on the governments of Singapore, the Philippines, and Indonesia, leading to the defacement of dozens of government websites across Asia.

On Friday, Anonymous also defaced the website of Singapore’s Strait Times newspaper over a “very misleading” blog post that covered the collective’s threats against the government of Singapore in the following video, which has been viewed over $375,000 times since Oct. 31.

The video was posted in response to a Singapore policy that “requires some news websites to obtain licenses and possibly remove offensive content,” Huffington Post reports, a move that would, according to critics, greatly restrict freedom of speech and personal privacy online. It also followed the city-state’s announcement of a $105 million investment in digital defense security over the next five years.

Anonymous called on “fellow Singaporean brothers and sisters” to protest by dressing fully in black and red on Nov. 5 and paint the “streets with the colors that represent the current Singaporeans emotion.” Anonymous also urged Singaporean supporters to change their Facebook profile photos to black and to post a status update that declares, “I want my freedom back!!”

Across Southeast Asia, Anonymous is preparing for its Million Mask March. There’s a corresponding Filipino video (seen below), and over 1,300 people have signed up on the accompanying Facebook event for the Batasang Pambansa, the federal legislature of the Philippines.

Hackers also defaced several government websites and replaced the pages with the announcement video and an image from V for Vendetta. The Facebook page reportedly claims that at least a dozen government websites were defaced to bring attention to the current bribery scandal implicating president Benigno Aquino. Alternate news site the Anti Media listed 30 sites it claims were successfully defaced, some of which still show the headless Anonymous emblem as the favicon in the browser tab.

In Indonesia, self-identified Anonymous hackers attacked roughly 178 Australian websites, in response to the Edward Snowden leak to Der Speigel that exposed Australian government cooperation with U.S. spying efforts. The sites were not government sites, however, but generally outdated and vulnerable “civilian” sites, many of which continue to display the defaced page. Some of the sites also belonged to charitable and nonprofit organizations.

No database hacking or data destruction was reported in any of the attacks across Malaysia, the Philippines, or Indonesia.