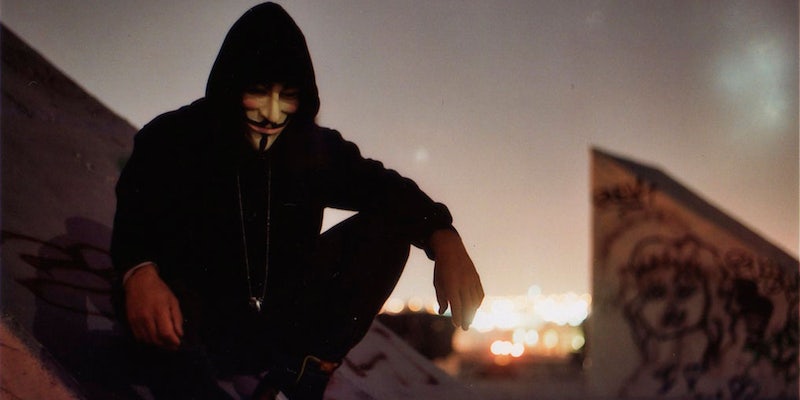 "WE R ONE WE R LEGION," the graffiti read, in part.

Five men who graffitied a wall in Singapore with pro-Anonymous graffiti are now facing years in prison, thousands of dollars in fines, and lashings with a cane.

The men, all Malaysians in their early- to mid-twenties, may have been inspired to action by “The Messiah,” aka James Raj Arokiasamy, 35, a famous Malaysian hacker and prominent proponent of what’s known as #OpMalaysia in Anonymous circles. Arokiasamy was arrested in early November for hacks against a local town council and a blog of the The Straits Times newspaper, among others.

Launched that same month, #OpMalaysia called on citizens to “paint the streets with the colors that represent the current Singaporeans emotion,” i.e., black and red.

It seems the five arrested for graffiti took that call literally. On the ramp outside of the headquarters of Scape, an organization dedicated to fostering leadership among youth, two of them allegedly wrote: “WE R ONE WE R LEGION WE DO NOT WE DO NOT FORGIVE WE DO NOT FORGET EXCEPT US! TSK” “Tsk.”

Others painted graffiti  at Sunshine Plaza with a similar message.

The men now face fines of up to $2,000, a possible two to three years in jail, plus three to eight lashes from a cane for each offence.  Bail for each is $15,000, which was paid, and the trials will begin Jan. 22. Police have already clarified that there was no formal link between the arrestees and Arokiasamy.

On Jan. 16, Anonymous publishe a a press release on Pastebin, dubbing the group “The Singapore Five” and demanding their release.

“Only in a country as authoritarian as Singapore would corporal punishment and years in prison seem a reasonable sentence for an act of civil disobedience that harmed nobody,” the release said.

Michael Fay, the infamous American teen sentenced in the ’90s to four lashes, claims to have suffered PTSD as a result of the process. The New York Times reporting on his case in 1994, described the physical ordeal of caning: “People who have undergone a caning say it results in heavy bleeding and permanent scars and is usually so painful that the prisoners go into shock.”