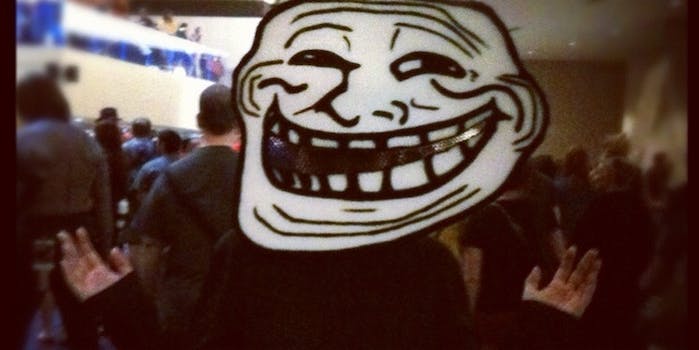 YourAnonNews (YAN) is one of the largest activist accounts on Twitter, with 1.1 million followers.

YourAnonNews (YAN) is one of the largest activist accounts on Twitter, with 1.1 million followers. The People’s Liberation Front (PLF) has a highly influential revolutionary Twitter account with a following of more than 10,000, and is run by Commander X, one of the best-known members of Anonymous.

Commander X’s mainstream fame stems from his decision last year to flee the U.S. and head to Canada, where he has been happily giving interviews and enjoying the social status of a martyred political refugee. Hey, it’s Canada. That’s a BFD here.

In the wee small hours of last night, about 3am ET, when the only things stirring on Twitter were Europeans and online pranksters, the notorious troll syndicate Rustle League somehow seized control of the PLF’s Twitter account and began tweeting inflammatory material, including racist slurs, anti-Semitic remarks, and, yes, Goatse. (Seriously, do not open any pictures you see on that account till it’s been restored.) 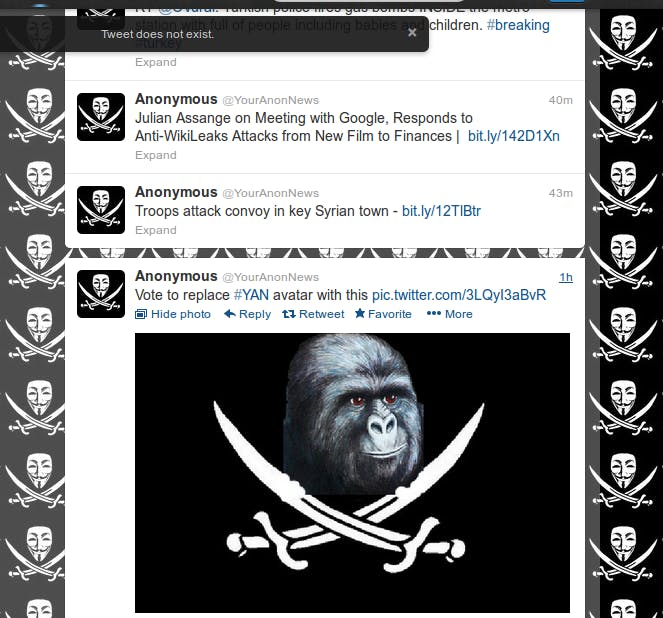 Rustle League briefly threatened to make some of the 1360 DMs on the PLF account public, but after a few minutes they threatened to delete them instead, saying that making them public would hurt too many people they didn’t wish to hurt. It’s unclear if any DMs at all were, in fact, deleted: It’s more Rustle League’s style to create short-term mortification and outrage rather than do lasting damage to accounts.

We’re not dropping ALL the DMs because certain people in here could really be damaged from doing so.. #NoSrsly

Grabbing the PLF account would be routine for a group like this with proven hacking and social engineering skills, but this one came with a side benefit, one that was likely the entire point of the exercise: the PLF Twitter account is a part of the YourAnonNews collective.

YAN is a group account, and approved members can use their personal Twitter accounts to create tweets, hashtagged #YAN, which are automatically tweeted by @YourAnonNews account. A participant told me last year that there were in excess of a dozen such authorized members, which creates an obvious security liability. You are indeed only as strong as the weakest link in your chain, even if you are YAN.

Back in February of this year, Rustle League seized one of the other large Anonymous Twitter accounts, Anon Central, who became an interested bystander in last night’s event.

Australian journalist Asher Wolf had some pointed remarks on the situation.

How much money did #YAN raise again for a media platform that is currently being pwn’d by RustleLeague ?

Earlier this year, YAN created a WePay campaign to raise funding for a Web-based news platform that would pay its contributors. The goal was $2,000, and they raised in excess of $54,000 via Canadian site IndieGoGo. Requesting money has always been deeply controversial within Anonymous.

Sad to say this but our cult leaders have been pwned by #RustleLeague. Let this be a lesson for them. #Anonymous #40oz #RWO

@thederpawards @rustleberry it’s a group account, PLF had tweeting rights to the YAN account. Question is, what is considered a “hack”?

At about 4:30am Pacific time, YAN administrator Jackal Anon, who had been asleep, regained access to the account and began deleting the offending tweets. Goatse images can and do get accounts suspended, hacked or not. YAN began tweeting news relating to the Syrian civil war and Turkish demonstrations.

YAN is fixed now back to bed…

The PLF account, however, remains under the control of Rustle League, which continues to tweet things your mother would not want to see. Particularly not before you’ve had your coffee and a strong sedative.

@_golden_rule_ @plf2012 i think jackal axed x’s access. shutting the barn door after the horse has been made into burgers, heh.

Update: After we published, a Rustle League member reached out to claim responsibility for the December 12 hack of @YourAnonNews and its resulting suspension for posting Goatse images.