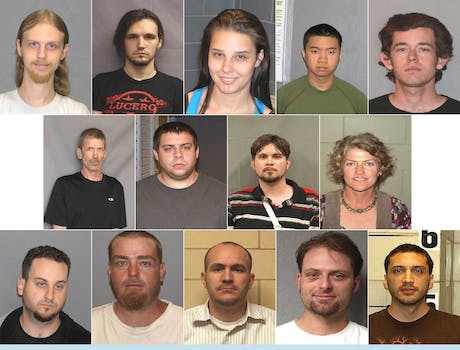 Anonymous to show up in person for “PayPal 14” trial

The 14 alleged Anonymous members charged with a 2010 hack of online payment service PayPal are finally going to trial, and Anonymous is going to be there in the flesh to support them.

The hacktivist collective Anonymous is best known for hacking from the shadows. Their name is not accidental. So it’s somewhat surprising that they are calling for a big show of force in meatspace on Friday.

The PayPal 14, a group of Anonymous activists who were arrested in July 2011 for allegedly hacking the online payment service, are going to court tomorrow and Anonymous has called for a protest in front of the Federal Courthouse in San Francisco.

“Hey San Francisco Anons, let’s show the feds we stand by our own. PayPal 14 will be at Federal Court March 1st. Let’s roll on them BIG!” tweeted @YourAnonNews, one of Anon’s most popular Twitter mouthpieces.

Calling the public show of support “a bit unusual but not unheard of,” one of the defendants, Josh Covelli, told the Daily Dot that “Anonymous is not for people to hide behind, it’s an idea for people to fight behind.” Covelli said that he had no idea how many people might show up.

The PayPal 14 were arrested for a 2010 distributed denial of service (DDoS) attack on the eBay-owned payment service after it declined to process donations for WikiLeaks founder Julian Assange, and canceled his PayPal account.

The defendants were charged with two felony counts each, with a combined maximum sentence of 15 years in prison and a $500,000 fine. Last week in a U.S. District Court in San Jose, Calif., each of the defendants pleaded not guilty.

Covelli said the defendants would be meeting one at a time with a judge, “who will weigh out whether the gov’t, or us for the matter, have a strong case.”

What are Covelli’s thoughts on the eve of his court appearance?

“Fuck the government.  Fuck Sabu.  Free Bradley Manning.  Free Julian Assange. Free Jeremy Hammond.  These are the things I think about basically everyday. Until those people and the many other political prisoners, not to mention the citizens of many tyrannical countries, are free this is what I will always think about.”

In December, a London court convicted another Anonymous member, Christopher Weatherhead, for participating in the hack against PayPal. He was sentenced to 18 months, the first sentence ever handed down in the U.K. for a DDoS attack.