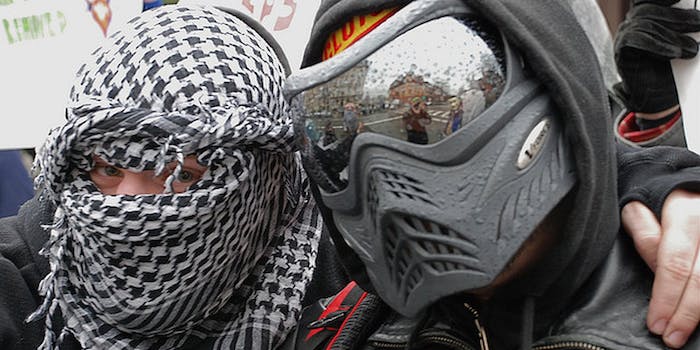 Anonymous takes down hundreds of Israeli websites in #OpIsrael

The Israeli government says there have 44 million hacking attempts aimed at its websites since the commencement of hostilities in Gaza last week.

In a YouTube video posted November 17, Anonymous announced that until the Internet is restored and hostilities cease, they will attack any and all websites they deem to be hosted in Israel.

Now is the time for anonymous to help the people that are hurting. Help the people that are being taken advantage of. Help the ones that are dying and it will further the collective as a whole and we can help bring a peace within the Gaza region to those people that so desperately need it. We call on the Anonymous Collective to hack, deface, doxs, hijack, database leak, admin takeover, 404 and DNS terminate the Israeli Cyberspace by any means necessary.

Israel, the angel of death has been called to your cyberspace.

According to a related press release, “When the government of Israel publicly threatened to sever all Internet and other telecommunications into and out of Gaza they crossed a line in the sand.” The statement went on to remind people that Anonymous got involved in Egypt when President Mubarak began interfering with communication, banning Twitter and attempting to shut down Internet use altogether.

According to PunkBoyinSF, “#OpIsrael was initiated by a handful of Anons because the IDF announced they’d shut down Gaza Internet, BEFORE they raided.” By Friday, Anonymous was announcing 600 Israeli websites defaced, hacked, or simply downed. As noted in the video, that’s 600 out of approximately 10,000 attacked. Still, this is a very real threat, and the Finance Minister has said that they are now “fighting a war on two fronts.” The Israeli government said they had endured 10 million attacks on the President’s site alone, 44 million on government sites since the commencement of hostilities.

Anonymous wasn’t finished with them.

They deleted the database of the Bank of Jerusalem. They did the same to the Ministry of Foreign Affairs. They released a list of all Israeli embassies and consulates, and took some of them down. They downed MSN in Israel and defaced Windows.co.il. They leaked the personal data of 5,000 Israeli officials. They leaked usernames and passwords for a real-estate search site. Just in case anyone thought they were kidding, they took the websites for the IDF, Mastercard, and the Microsoft search engine Bing offline.

You can read the whole list of defaced sites on Pastebin.

Anonymous has also released a Gaza Care Package (in Arabic and English, and coming soon in Hebrew) containing first aid instructions as well as guidelines on how to stay connected when the official Internet has been shut off.

Predictably, many pundits and bystanders are now equating Anonymous with Hamas and terrorism, a charge Anonymous strongly refutes in a press release posted on numerous sites:

“Anonymous is a world wide collective of individuals whose means pursue human rights, justice, and universal equality for the citizens of every nation. The reasons for Anonymous intervention through #OpIsrael should be abundantly clear: What is happening in Palestine is oppression. Anonymous has not used any anti-Semitic language during our campaign. Nor have we vocalized any support for Palestinian military operations or resistance groups. Our goal was to protect the rights of Palestinian people who are threatened with silence as Israel has made attempts to shut down cell phone and Internet service throughout Gaza. We know what happens to victims of oppression when the lights go dark.”

Meanwhile, the conflict continues on social media and on the ground in Gaza.

“The war is taking place on three fronts,” Carmela Avner, Israel’s chief information officer, told Reuters. “The first is physical, the second is on the world of social networks and the third is cyber.”

The battle has been waged on YouTube and Twitter. where accounts for the Israeli Defense Forces and Hamas have spread propaganda. On YouTube, Israeli forces uploaded a video that reportedly shows the attack on al-Jabari.

In total, 91 Palestinians have been killed and “700 wounded, including 200 children, as the assault ground on unrelentingly despite efforts toward a cease-fire,” the New York Times reported.