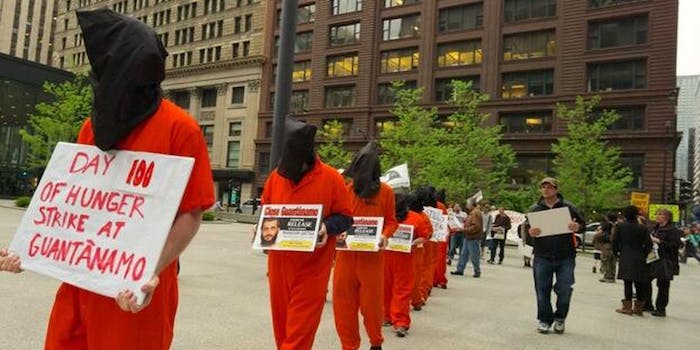 Guantanamo shuts down Wi-Fi in response to Anonymous’ #OpGTMO

President Obama plans to address the situation at Guantanamo in a Thursday speech.

So, after four solid days of OpGTMO, what’s the net result?

OpGTMO is the hydra-headed Anonymous/Code Pink/ANSWER Coalition//London Guantanamo Campaign operation marking 100 days of a hunger strike by prisoners at Guantanamo Bay detention camp, aimed at forcing President Obama to honor his promise to shut down the facility.

Was it, as promised, “bigger than OpIsrael?” Did the government and military even notice?

Al Jazeera freelance reporter* Jason Leopold had the best answer to that question, all the way back on Friday, the day the operation launched.

Just arriving in Fla from a week at # GITMO. No wifi on the island. Base commander ordered it shut down until Mon due to #OPGtmo threat

Lt. Col. Samuel House confirmed to the AP that Gitmo had gone dark for the week, even blocking access to Twitter and Facebook on the computers which are wired to the grid, to protect against unspecified threats by Anonymous. Much to the government’s surprise, however, OpGTMO had no real hacking, doxing, DDoSing, or even pranking component.

A so-called leak of personnel details was quickly debunked, having apparently been tacked on to the Op’s coat-tails opportunistically. In reality, OpGTMO was entirely focused on direct communication with the government by telephone, fax, email, social media, petitions, an attempt to buy an ad in the New York Times, and even in-person protests.

By collaborating with well-known peace groups such as Code Pink, Anonymous gained legitimacy; in return, it’s certain that those groups extracted a promise to minimize online mayhem and potentially illegal activities.

By mainstream measurements, it was an extremely successful awareness campaign. According to the International Business Times, #GTMO17 was the top trending hashtag in the world on Friday the 17th. The next day, #GTMO18 was top in the U.S. and third in the world.

What does this mean for the U.S., Gitmo and the prisoners held there? Well, suddenly the President has scheduled a speech for this Thursday to address the issues of Gitmo, drones, Al Qaeda, and terrorism. Colonel Morris Davis, the former chief prosecutor at Gitmo, tweeted out the news joyfully on Sunday, using the #GTMO19 tag and adding a link to the Change.org petition to close the prison.

So, was it a success? Was it “bigger than OpIsrael?” OpIsrael was a pro-Gaza hacking operation, and a shockingly successful one that must have stunned and embarrassed the usually well-prepared government of Israel. OpGTMO is an awareness campaign aimed at forcing a sitting President to honor a campaign promise he made in 2008 and has been slowly backing away from ever since. It brought the plight of the 103 hunger strikers (of 166 prisoners) to international attention, sparking demonstrations in Europe, Middle East, and the U.S. But did it work?

Tune in Thursday at #GTMO23 to find out.