Inside OpAntiBully, the campaign that avenged Amanda Todd

"Not everything needs to become an Op," says a founding member of OpAntiBully who just made the decision to go mainstream.

But when hackers locked in on the man who allegedly blackmailed the Canadian teen, OpAntiBully took on a life of its own. The media swarmed, propelling it into the spotlight, winning it public support, and paving the way for many successful campaigns counseling at-risk teens and, more commonly, harassing their harassers until they quit.

After Amanda Todd came Rehtaeh Parsons and Audrie Pott. You’ve probably heard the names of those whose lives were taken due to online harassment. But we will never know the names of most of the children and teens whose lives have been helped or even saved by OpAntiBully.

One of the first high-profile collaborations between Anonymous and non-aligned individuals and organizations (such as James McGibney’s Bullyville), it focuses exclusively on putting a stop to the bullying of youths, both online and in real life. By reaching out to and working with non-Anons, the operation has been able to mobilize far greater resources and gain public acceptance in a way that an all-Anonymous operation could not.

Now one of its founders is moving on.

The Daily Dot sat down with Katherine Wells (a pseudonym), one of the non-Anonymous founders of OpAntiBully to discuss how it all started just eight months ago, some of the major operations, where it goes from here, and why Wells recently left the group she cofounded to go it alone.

Let’s start with the obvious question: How and when did OpAntiBully begin?

The 16th of November 2012 was the first public mention of the hashtag, two days after the Kylie chronicle [suicidal teen Kylie Kylem’s bullying at the hands of a group of schoolmates], and it was circulated by seven people: GonzoPhD, DoxSex, Ash, AnonKnowledge, Anonymous420 (now he’s 420Reborn), Seraphim, me, and a lot of other people came in afterwards to help.

The original idea to start anti-bullying activities came from AnonKnowledge and the wording came from Ash. I was kind of undercover. I was in direct communication with some of these people, but some others weren’t even properly aware of me at all.

How has OpAntiBully evolved from the beginning?

The nature of the work changed, but in the beginning a lot of it was showing up Amanda Todd bullies. On the night between the 13 and 14th of November, this boy came looking for help for Kylie at Amanda Todd’s mother’s account. I headed him off and talked to him and made sure he was not a troll, the bullies were real, and I passed the info on after I checked it out. [As we reported the next morning, the bullies and an adult bully were traced and threatened with public humiliation and school intervention, whereupon they apologized.]

Can you tell us about some lesser-known cases that OpAntiBully was involved with, and how they tend to operate?

That Texas rape threat [of a 13-year-old girl by 17-year-olds] happened before Kylie; it happened at the end of October and I made contact with her long before Kylie. After Kylie happened, Ash wanted something similar to work on, and I said, “There’s this little girl and we have screenshots and I think we can find the bullies.” That was a cooperation between the two of us. Ash actually signed the dox with his name. It was the first dox with the OpAntiBully hashtag on it. It was a perfectly legal dox: There were no home addresses on it, just name and school. Once it came out, lots of people helped confront the bullies.

There was a time we were investigating a fake suicide trend among teen girls. It was blackmailing celebrities into following you on Twitter via suicide threats: kids from the U.K., Australia, and the U.S., making up all kinds of fantastic stories, their friends “tweeting for them while they were in hospital” and so on. They don’t become doxes. [OpAntiBully talks to the kids directly instead, or contacts a third party, such as a school counselor, to personally intervene.]

There was a Swedish girl claiming to be bullied, a self-harmer, suicidal. I was talking to her, a few people were talking to her. In the end she was quite easy to find. We found an Anonymous supporter who lived in her town and contacted her school. We were quite concerned. None of it turned out to be true.

A lot of stuff I did until December was taking down child porn images of Amanda. And when it was someone under 18, I’d prefer confronting them rather than getting their account suspended (which is the usual procedure) because I thought it had to be a learning experience for them. I think I had 40 images or so that I tracked in my files. We had real-world actions. I helped Amanda’s mom build contacts on twitter, etc. The Snowflake walk happened [commemorating Amanda and opposing bullying]. But the majority of people posting the images were under 18! The majority were girls under 16. It’s really really disappointing, posting Amanda Todd’s image a lot.

Why would they do that?

Basically a lot of judging. “It’s fun to show a dead girl that was exploited, to show her off as a joke.” Nobody, not even the adults, seemed to understand the concept of online luring. The concept is that the child will do things willingly; that is online grooming, online luring, and it could happen to anyone. 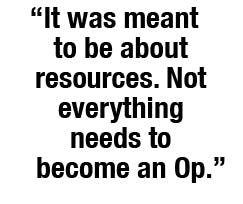 OpJustice4Rehtaeh was in April. I created the OpAntiBullyInfo account on December 11th and it wasn’t really meant to be the one and only. It really took off in January. [ the account is the OpAntiBully counterpart to YourAnonNews, a collective news feed] It was meant to be about resources. It’s not that everything needs to become an Op, it’s more that you can point the people who need them to resources. If the case is extreme, you can intervene like in the Kylie case.

My experience was the discovery that I could problem solve with youth. Especially if they didn’t want to talk to their parents or teachers! And then I helped ease them into the idea of talking to those people.

What are some resources you recommend and how do you decide what to recommend to whom?

If I know where someone lives then I’ll become very concrete in my recommendations, but I do refer people to Removingchains.org, also Stompoutbullying (warning: autoplay video), and Beyondbullies has a team support chat every Wednesday with teen mentors which is kinda cool. In the U.K., Childhelp and Beatbullying, they are pretty decent. There is Youthbc in Canada. Childline also has a support chat room and BullyingUK. There are others but those are the main ones.

Most of the people who approach us are from the U.K. or U.S. But what’s very interesting that pretty much nobody has made their chat rooms mobile compatible. The kids, I want to send them to qualified support and they cannot access it. They don’t want to use phones because they have limited minutes on their phones, and often their parents are paying for them. They feel less comfortable actually talking. They’d like to access online support and they can’t. And sites are not [mobile] compatible. They can load the site but not the chat on their phones.

Bullying sites that are only info are only good for parents and teachers. I want the sites to use [teen] mentors and be mobile-compatible.

After I left OpAntiBully, I was talking to a young depressed teen from Devon, and he’s willing to use online support, but he’s on a pay-as-you-go phone with no money, and if he uses the phone in the house his parents will hear him. He has no laptop, and a lot of kids are in that situation. Not every parent can throw a $500 phone and laptop at their kid. It seems ridiculous to me that I keep running into teens who cannot access support due to some technical neglect. I’d like to get into lobbying these organizations to get a move on and get mobile-compatible. He couldn’t even access the library computer either without parents’ permission.

I also ran into a lot of bullied teens who were identifying with Anonymous. They were using Anonymous as a situation to flee to from bad real life situations.

Why won’t kids talk to their parents?

They don’t want their parents to get upset, they don’t think they’ll be believed, they’re oddly quite comfortable talking to complete strangers about it.

Teens complain the sites need to be edgier, speak their language. Be cool.

Cool doesn’t mean childish either. Some of them look too young for teens. I think there is a marketing problem! Most bullying sites are more geared to parents rather than kids, and speak the language of parents and teachers, and that’s not good because it’s your one chance to reach these kids who aren’t speaking up.

Why did you leave OpAntiBully?

I left on the 17th of June. There was some interpersonal friction with a portion of the group, but in the end it was just a catalyzer. There was a realization that I want to work on this differently; I’m focused on the victim, I’m not that focused on hunting down the bully. Empowering youth to help themselves, distributing info to help them to do that. One of the last things I did, that little girl with the ferret [her parents said she could get a ferret if she had enough retweets; instead, she got death threats] she was happy lots of people said, “That’s wrong!” But the lesson is: There are always creeps online, but if a little girl knows what to do, how to complain, she will tell her parents next time.

I also don’t know if an antibullying resource account in Anonymous has the right time achieving the right audience—youth, not adults. I seem to be moving in a different direction. I’m always more interested in the victim than the bully. That’s the first place I always want to go to. I definitely am evolving a new way of looking at things, and I’ve never been that interested in the punitive element.

I am getting more interested in the mainstream approach. Whatever conflict or disappointance started this disassociation is not that important. I noticed how easy it was to leave. If I can be useful I’ll be useful. I’m not really qualified, but I’ll listen and refer kids to somebody a little smarter and more competent than me!

The cases where a child dies, they make the news, but I think we should make a habit of making noise for the children who are alive.