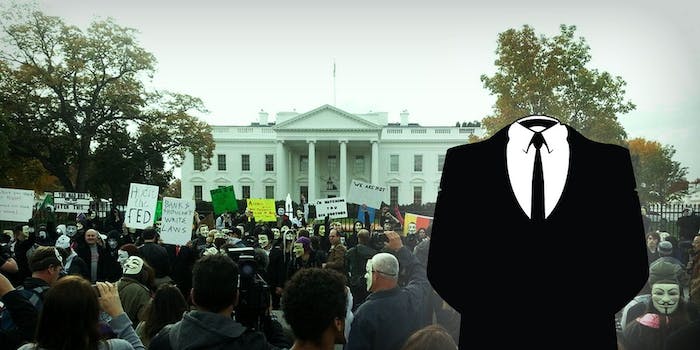 Tensions appear to be high in Washington, D.C., the focal point of the hacktivist collective's global day of protest.

Scheduled to coincide with Guy Fawkes Night,  a centuries-old day of remembrance typically celebrated in Great Britain, the Nov. 5 protest is something of a tradition for the hacktivist collective. Anonymous, which is often identified by the Fawkes mask used in the Hollywood blockbuster V for Vendetta, hosted a similar rally in 2011, dubbed “Night of a Thousand Masks.” In both cases, the rallies serve to promote social justice and combat political corruption, among other causes.

This year’s edition comes at a turning point for the group. Anonymous has returned to national headlines in light of the #OpMaryville, an effort to force Missouri prosecutors to launch an investigation into a previously dismissed rape case, and #OpFrackOff, which lent support to the First Nations Elsipogtog community in Canada. In both cases, the collective has been credited with bringing serious press coverage to the events.

The Million Mask March is unlikely to draw a million people worldwide, but the name is certainly a nod to the group’s rising popularity and strength in numbers. The collective made a push earlier this week to rally support in Southeast Asia, and there have already been reports of masked demonstrators gathering in Australia, the Philippines, Japan, Indonesia and Thailand.

#MillionMaskMarch protesters say this is the first of many mass action pic.twitter.com/EsbyAhprx4

Protesters in Washington, D.C. clashed with police before noon. By approximately 10am, an arrest was made. The incident was livestreamed, and Anonymous claimed that the individual was grabbed and arrested after stepping off a sidewalk and into the street.  A spokesperson for the D.C. Metropolitan Police Department declined to comment.

An hour later, protesters removed police tape that had been used to limit their demonstration to the sidewalks and flooded onto Pennsylvania avenue.

Update: The livestream of the protest, mentioned in the original version of this story, is no longer available.