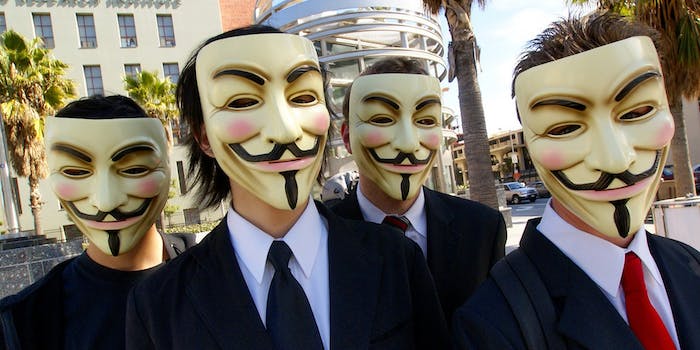 In the annals of blockbuster hacks, this attack surely counts as a bit of an embarrassment.

Hacker collective Anonymous has posted the identifying information of 50,000 Ohio residents it believes are helping obstruct an investigation into the rape of a 16-year-old girl last August.

But, in the annals of blockbuster hacks, this attack surely counts as a bit of an embarrassment.

Indeed, the “leak” apparently consisted of a trip to the Ohio Secretary of State’s voter registration site, where the data files are all free to download with a simple click of the mouse. (And in another twist, the Twitter account for the group claiming responsibility for the leak, @Anon_Acid, has been suspended.)

Earlier this year, police arrested two star Steubenville, Ohio football players, Trent Mays, 16, and Ma’lik Richmond, 16,  and charged them with raping and kidnapping a girl over the course of an entire evening in August. Witnesses, mostly consisting of other student athletes, joked about the alleged rape on Twitter, and one even posted an Instagram photo of Mays and Richmond carrying the alleged victim—who was too drunk to walk on her own—by her arms and legs.

Yet according to a report in the New York Times, when a local police chief begged for witnesses to come forward no one spoke up. The rape has divided the small town, where football is king. And despite the wealth of evidence on social media, many in the community would rather believe the whole event was a work of fiction concocted by the victim. As one of Steubenville’s football coaches told the New York Times: “The rape was just an excuse, I think …What else are you going to tell your parents when you come home drunk like that and after a night like that? She had to make up something. Now people are trying to blow up our football program because of it.”

Mix a heinous crime recorded on the Internet and allegations of an official coverup, and its little surprise the vigilant eye of hacker collective Anonymous zeroed in on the case.

That video received widespread media attention. But if this latest salvo also spreads, it will be for all the wrong reasons.

“City Of Steubenville, Your justice system is broke and needs to be fixed maybe this might help a little,” the group wrote in the text file announcing the release.

What that has to do with Gene Viola of Wintersville, Ohio, and Sheryl Ware of Mingo Junction—two of the thousands of people whose information was released in the dump—is entirely unclear.

Indeed, the 50,000 people in the 16-megabyte .txt file have no apparent connection to the case at all, besides their geographic proximity to it. By lashing out at innocent citizens in the community at large—rather than those allegedly involved in the coverup—Anonymous risks turning public opinion against them.

And all over an attack that is symbolic, at best.