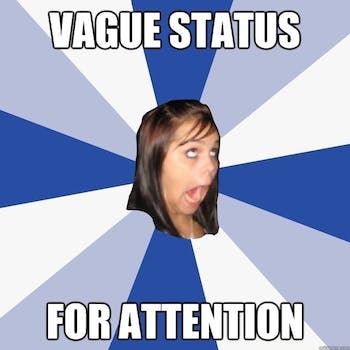 Talk about knowing your meme. Dogged redditors found reason to believe the backstory behind Annoying Facebook Girl was a hoax.

Right about now, a young woman named Jess should be coming to terms with the fact that she’s a meme. Annoying Facebook Girl, to be more specific.

After the Daily Dot published yesterday’s story on Annoying Facebook Girl, however, Know Your Meme found one redditor’s appropriately skeptic response. After a bit of detective work, average_fan thought something was off:

“I smell something fishy… Found Megan via boyann’s Facebook (with some uber stalking skills) and that pic is uploaded about a week ago… found that so called Jess in he friendslist, has only one open pic and account was created on December 6th…

Google searched for that pic, found another girl with that exact photoset someone posted – account made in May 2010 and the album where she uploaded the pictures is last updated over a year ago.

Even if that girl in the picture IS Annoying Facebook Girl, it’s not that friend Jess, that’s for sure…”

Other commenters seemed to agree with average_fan; the post was upvoted 2088 times.

Even so, redditors weren’t ready to give up so easily. Another commenter, cmonthrowmeaway, wrote that he or she found Megan’s–– Jess’s supposed best friend–– profile, and that several of her friend photos resembled Annoying Facebook Girl.

“Guys…this isn’t over,” the redditor wrote.

However, original poster boyann wasn’t willing to let it go. A redditor claiming to be the Annoying Facebook Girl set up an AMA today, but deleted his or her account after being unable to prove her identity with a photo.

“ah ha! She did an AMA! Here’s my post from yesterday she’s talking about!” boyann wrote before the AMA account got deleted. He’s been inactive since then.

Regardless of the hoax, whenever the real Annoying Facebook Girl comes forward, she’ll be welcomed into the meme community with open arms. Real-life image macro Scumbag Steve wrote a personal letter to her on Slacktory about the realities of being a meme.

“Just remember who you are. And that you know you’re a decent kid,” he wrote.

Image from Know Your Meme