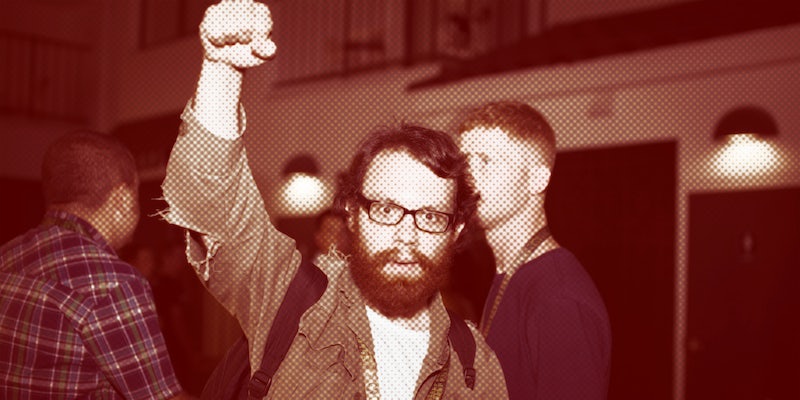 Weev placed in solitary confinement for tweeting from prison

Hacker Andrew "Weev" Auernheimer says he's being punished for communicating with the outside world.

Andrew “Weev” Auernheimer, the highest-profile prisoner found guilty of breaking the “worst law in technology,” has been placed in solitary confinement, his lawyer believes.

The reason, Weev says, is because he was tweeting from prison.

Weev has become something of a martyr for those who want to reform the highly criticized Computer Fraud and Abuse Act (CFAA), under which a host of common computer-related activities, like breaking a website’s terms of service, can be a crime. Weev found a means to get AT&T to send him more than 120,000 customers’ email addresses, which he then passed to Gawker. He was charged with identity theft along with violating the CFAA, and sentenced to three and a half years in prison in March.

He quickly found a way to reach the outside world. Using his prison’s truncated Internet connection service, which allows inmates to send prescreened messages to approved contacts on the outside, he apparently sent tweets to a partner, who then posted them on Weev’s account, @rabite. There was a slight delay, but Weev was essentially tweeting from prison.

But something’s gone wrong. Weev hasn’t tweeted since April 8, when he posted a brash and unapologetic condemnation of Aaron Swartz, the lionized Reddit cofounder who committed suicide in February after facing severe CFAA charges of his own.

Get on your fucking knees and thank Heavenly Father that I’m not @aaronsw. Otherwise we’d have no fucking chance.

Weev’s lawyer, Tor Ekeland, can’t get in touch with him despite constant attempts. It’s been about ten days since they had contact.

“I’m running into a brick wall,” Ekeland told the Daily Dot. The prison “hasn’t notified me of anything. I’ve tried calls, emails, faxes, saying please get back to me. I’ve called the general number five times today.”

“You can’t deny a prisoner access to his attorney,” he said.

The only hint is a letter Weev sent Ekeland, a portion of which Ekeland provided to the Daily Dot. He indicated he was being punished for figuring out a way to share a message with the world at large.

“I have been placed in administrative segregation, just punishment for the high crime of prison blogging,” Weev wrote.

According to the National Institute of Justice, “administrative segregation” is a synonym for solitary, and is reserved:

for violent or disruptive behavior. AS typically involves single-cell confinement for 23 hours daily; inmates are allowed one hour out of the cell for exercise and showers.

“The theory is he’s somehow a threat to the general population,” Ekeland explained.

“He’s a pretty strong individual,” Ekeland said. “He was willing to go to prison, but that’s got to be tough.”

UPDATE: A prison representative told Ekeland Monday that Weev is in “administrative detention” for “investigative purposes.” Ekeland told the Daily Dot that the representative wouldn’t say whether Weev was in solitary, though Ekeland has been granted a visit for this weekend.

UPDATE 2: Weev sent a letter from prison, dated May 5.