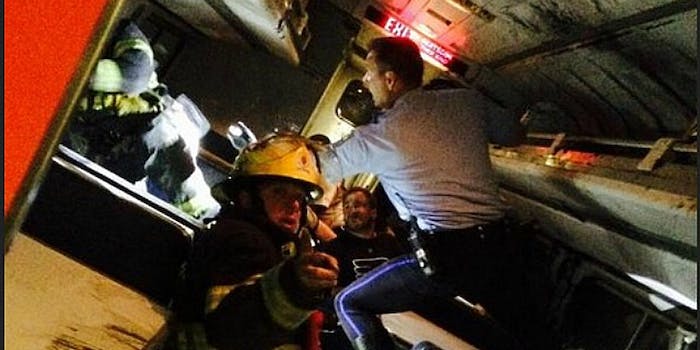 Eight are confirmed dead after an Amtrak regional passenger train derailed in Philadelphia on Tuesday night. The Philadelphia fire department has confirmed 200 people were injured in the accident.

According to WPVI in Philadelphia, between eight and 10 cars derailed about 9:30pm ET, and about 200 people were on board headed for New York from Washington.

Patrick Murphy—a former congressman from Pennsylvania—tweeted that he was on the train at the time of the derailment.

.@NBCPhiladelphia has a helicopter over the scene of tonight’s @Amtrak train derailment http://t.co/WSHAJCI49x pic.twitter.com/Oi222HIyOA

Just one of multiple firefighters I've seen bringing water to the injured. Something neighbors have done as well pic.twitter.com/9twX56DMb1

Been here a few minutes. A 3rd passenger just brought in to Aria Frankford. Staff appears waiting for more. pic.twitter.com/eSnuA7gXo2

Video I took moments after crash. People trying to open the door and get off the train. pic.twitter.com/fJ2bxXfmhG

Update 10:49pm CT, May 12: Philadelphia Mayor Michael Nutter says five people have died. “It’s an absolute disastrous mess. I’ve never seen anything like it in my life,” he said.

Update 9:31am CT, May 13: The crash has claimed another victim, a Temple University Hospital doctor, CNN reports, raising the number of dead to six. Medical professionals have treated at least 150 people, two of whom have been released.

Update 6:21pm CT, May 26: This post has been updated to reflect the final death toll of the accident.