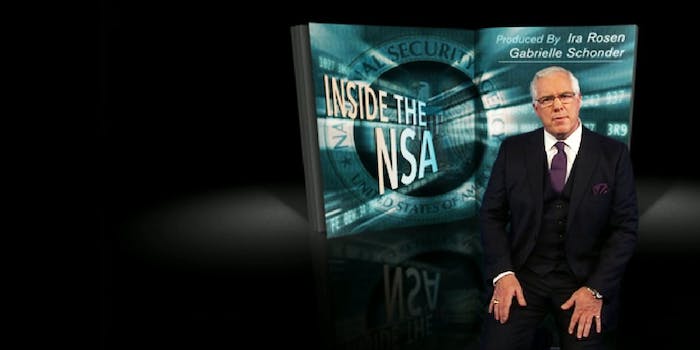 Some referred to reporter John Miller’s interview a form of state propaganda.

Sunday evening, a 60 Minutes profile of the National Security Agency in the wake of Edward Snowden’s classified leaks led to public accusations that CBS was acting as a mouthpiece for the U.S. government.

Hey, young people: Believe it or not, “60 Minutes” once stood for solid, deep, important journalism. I know, that sounds absurd now.

Once feared by America’s business and political leadership, the news program 60 Minutes has recently suffered blows to its reputation. Its Oct. 27 report about the 2012 U.S. Consulate attack in Benghazi, Libya, relied on a single source whose account was later shown to be inaccurate. A more recent Amazon profile, broadcast ahead of Cyber Monday, was also decried as a promotional piece.

CBS was granted exclusive access to the NSA’s facilities and staff for Sunday’s 60 Minutes segment. Senior correspondent John Miller, equally known for his award-winning journalist and distinguished career in government, conducted the interviews. Critics claim, however, that his objectivity has been tainted by his alternating between journalism and employment with U.S. intelligence services.

Miller began his career in 1973 as a journalist at New York City’s WNEW and later served as deputy police commissioner for the NYPD. In 1995, he joined ABC as co-anchor of 20/20, where he once secured an on-camera interview with Osama bin Laden. Miller later joined the FBI and also worked in the office of the director of national intelligence. In 2011, Miller once again donned the hat of a newsman at CBS, reporting for CBS This Morning and 60 Minutes. He is widely noted for his quick and accurate reports during the Sandy Hook school massacre. He also manned a news desk on Sept. 11, 2001, where it’s reported that his law enforcement experience played an important role in his ability to coordinate ABC’s coverage.

Throughout Sunday’s broadcast, many viewers expressed anger online over Miller’s NSA segment. Some referred to Miller’s interview as a form of state propaganda, while others lamented what they considered to be the desertion of journalistic principles.

“The fact is, we’re not collecting everybody’s email,” Alexander said at the start of the program. Oddly, there was no question proceeding his statement, an issue many seemed to take issue with. The show just launched immediately into an official government denial.

“There is no reason that we would listen to the phone calls of Americans. There’s no intelligence value in that,” Alexander told Miller as their back and forth began. “What they are doing is collecting the phone records of more than 300 million Americans.”

In that instance, critics contend Miller missed an opportunity to ask Alexander why metadata is so valuable to the NSA. Many have argued that the most intimate details of a person’s life can be discerned by observing who they talk to, from where. By monitoring metadata, the government could tell if someone had called an abortion clinic, for example, or visited a physician that specializes in the treatment of HIV, as journalist Glenn Greenwald recently pointed out to the BBC.

If Miller did confront the NSA with any of these concerns, the exchange must have been left on a CBS cutting room floor.

“So you understand then, there might be a little confusion among Americans who read in the newspaper that the NSA has vacuumed up, the records of the telephone calls of every man, woman and child in the United States for a period of years” Miller told Alexander, “that sounds like spying on Americans.”

At this point, critics say Miller could have asked Alexander to elaborate on how collecting someone’s phone records doesn’t qualify as surveillance. Instead, he opted to just ask a question that he already had the answer to: “You don’t hear the call?”

None of the concerns frequently raised by journalists, lawmakers, and even members of the public over the NSA’s spy programs were ever introduced into the conversation. No one critical of the NSA was interviewed. The word “rights” doesn’t even make an appearance in the 60 Minutes transcript. And the only journalist permitted to question the government officials was forced to declare a conflict of interest a minute into the show.

60 Minutes journalist tasked to report on the NSA used to work for the Office of the Director of National Intelligence. So there’s that.

Before the interview ended, Miller asked if a deal should be arranged with Snowden if he returned to the United States—a compromise that’s never been requested by Snowden.

Alexander responded: “This is analogous to a hostage taker taking 50 people hostage, shooting 10 and then say, ‘If you give me full amnesty I’ll let the other 40 go.’ What do you do?”

According to the New York Post, among others, Miller is now negotiating for a top intelligence position within the New York City Police Department.