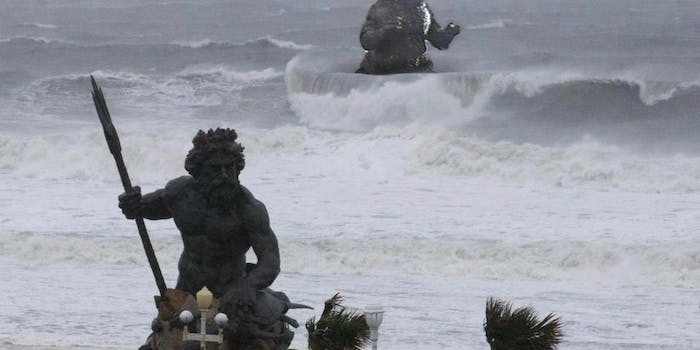 10 fake photos of the Frankenstorm

You may have seen these 10 photos going around the Internet today, but rest assured that none of them are actually images of Hurricane Sandy.

We’ve seen the pics, but did it actually happen?

While they still have power, many from North Carolina to Massachusetts have posted photos and videos of the destruction Hurricane Sandy left in its wake on the Web as the storm inches closer to making landfall on the East Coast. There are over 52,000 tweets about Hurricane Sandy in the past hour, according to Topsy.

However, a lot of Twitter and Facebook users are sharing photos with their friends and followers that didn’t actually occur. Some of the photos are a simple Photoshop trick, but others are fooling some of the nation’s top news organizations, and they are receiving thousands of retweets.

Lady Liberty’s fate looks uncertain as dark clouds loom nearby, but she’s not in any immediate danger. Snopes.com originally debunked the photo in 2010. The photo is actually a manipulation of the Statue of Liberty photo and a 2004 photograph of a supercell thunderstorm in Nebraska by photographer Mike Hollingshead. 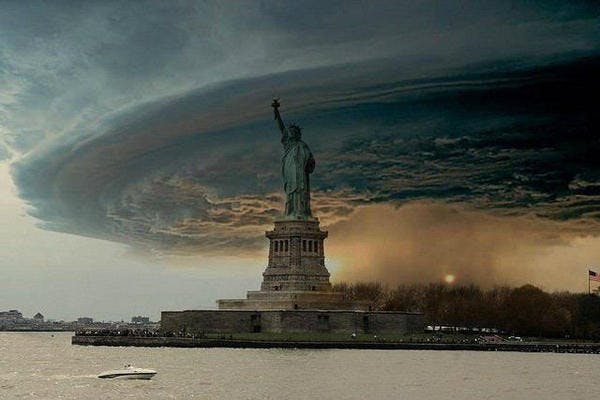 2) Tomb of the Unknown Soldier

Dan Marshall’s photo of three soldiers guarding the Tomb of the Unknown Soldier at Arlington Cemetery went viral earlier Monday. While the photograph is real, the context is misleading. The Old Guard confirmed that while there is a soldier still guarding the Tomb, the photo that caught so much buzz was taken in September. The George Washington Bridge connects New Jersey to New York City, but travelers don’t have to worry about this particular scenario, as the bridge is scheduled to partially close. The photo was not taken today, and as Elliot Bentley pointed out, this is a stock photo from 2009. 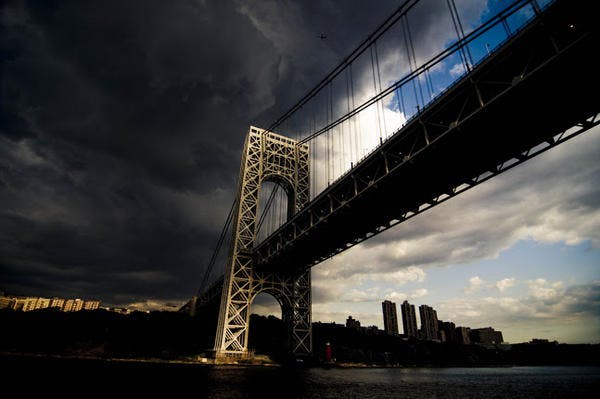 DMV Followers’s photo of a flooded McDonald’s in Virginia Beach was retweeted over 1,100 times, but it’s not real. In fact, it’s not even from a photograph. It’s actually a still image from Flooded McDonald’s, a film from Superflex. 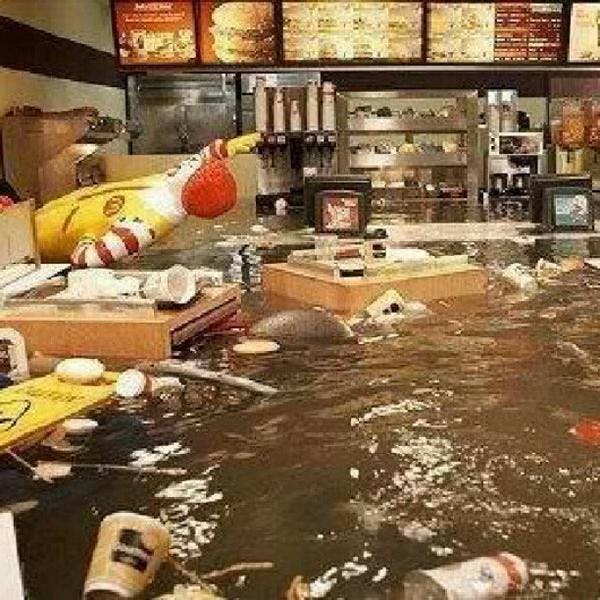 The birthday girl can’t catch a break. Just one day after turning 100, the famous statue suffers wave after wave from the rising Hudson River…or does it? The still is a scene from the 2004 disaster movie The Day After Tomorrow in which the Statue is consumed by a tsunami heading towards New York City, which Snopes.com also confirmed. 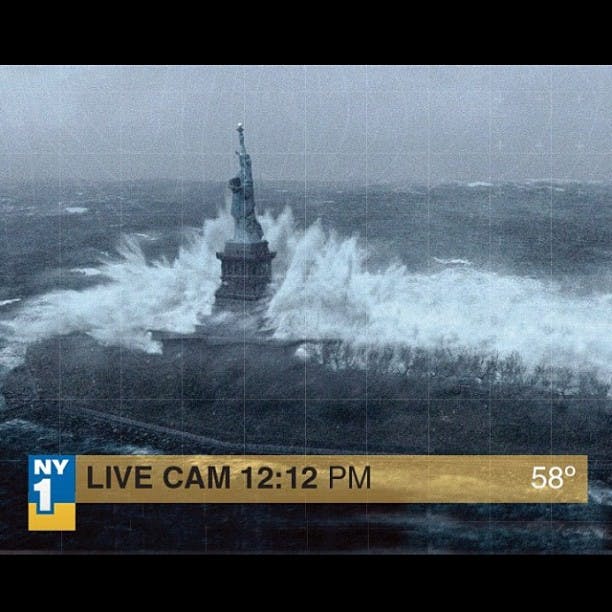 The widespread photo is not of Hurricane Sandy, but of a 2011 thunderstorm in Manhattan and the original photograph appeared in the Wall Street Journal and taken by Charles Menijvar through a tinted window, according to IsTwitter Wrong. 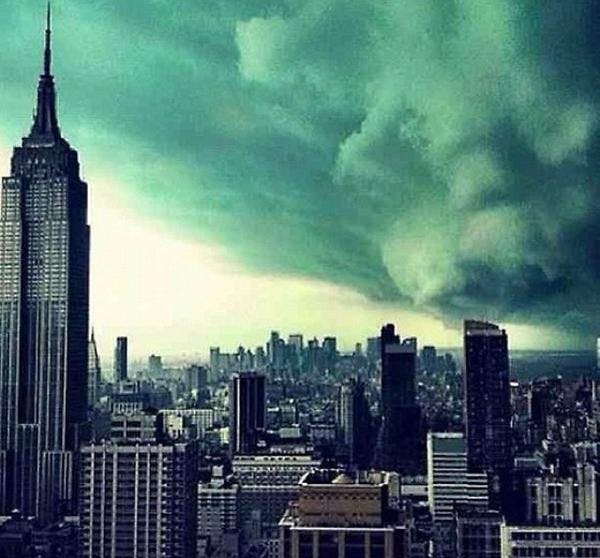 The photo hit Twitter with less success than some of the others on this list. It’s not one of the best Photoshop jobs, and you can also see the Twin Towers of the World Trade Center in the top right of the photograph. 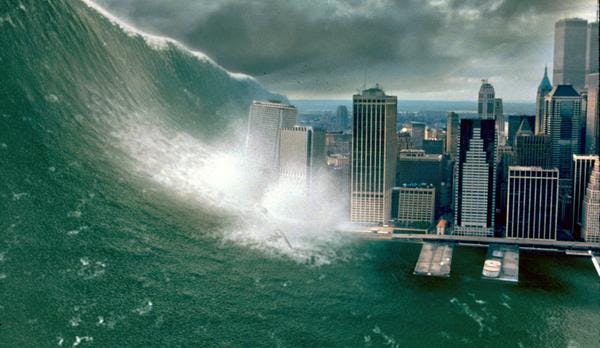 Did the sharks actually take Manhattan? Buzzfeed debunked JAMSTER’s second photo on our list in their “Are those Hurricane Sandy Photos Real or Fake” quiz. 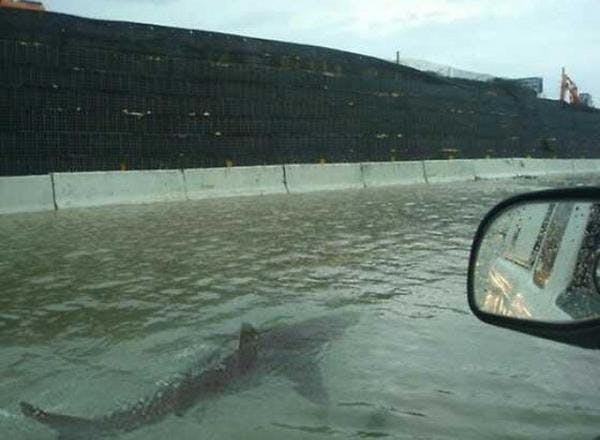 BuzzFeed’s Andrew Kaczynski posted the fake photo of clouds looming over the Statue of Liberty on Twitter, and later poked fun at his mistake by tweeting a picture of “Hurricane Sandy over Manhattan,” which is actually a still from the movie Independence Day. 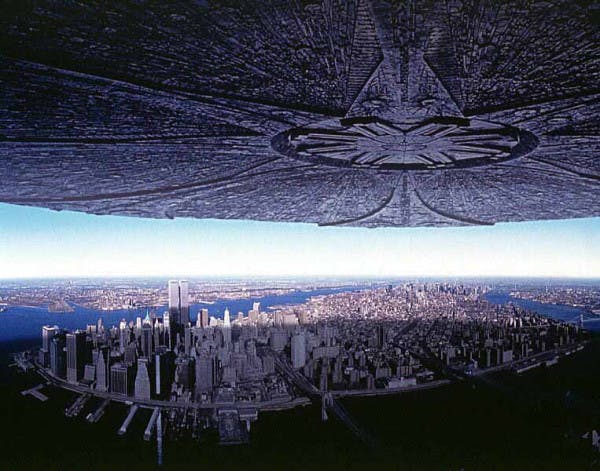 Always one to find the humor in things, George Takei posted a photoshopped pic of his own, which shows Godzilla inching closer to shore, with the following message: “Fans are concerned about Photoshopped storm images being shared to cause alarm, so I verified this one first with Fox News.” Touché. 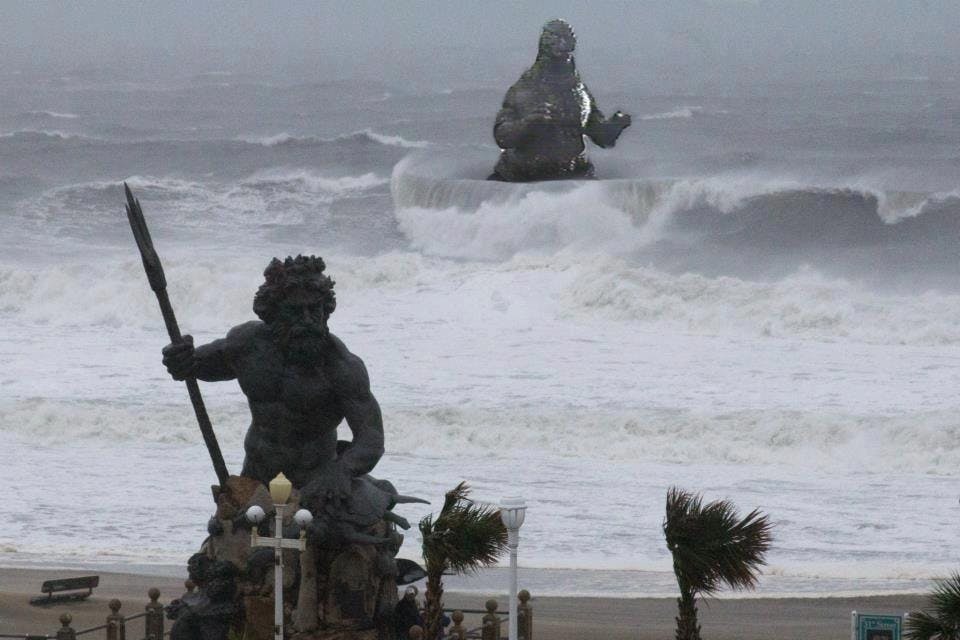