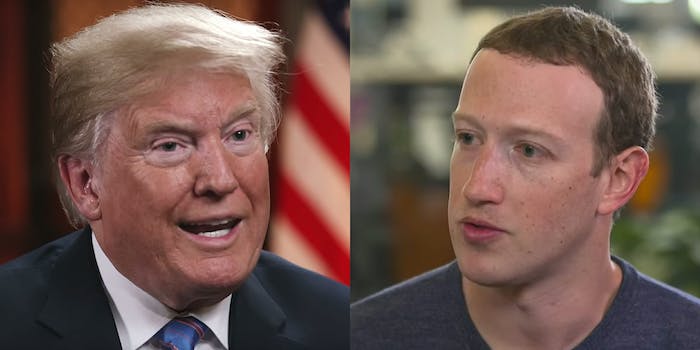 Report: Trump got a private call from Zuckerberg congratulating him on election

It's just one way Facebook showed appreciation for its 'valued customer.'

The private phone call, which until now has gone unreported, was verified by three unnamed sources familiar with the conversation, according to BuzzFeed News. The call was uncovered in a larger investigation into Facebook’s quiet endorsements of Trump’s presidential campaign, which were revealed in memos and other internal documents.

Based on the documents, BuzzFeed News concluded that the Trump campaign’s use of Facebook advertising was lauded by the social networking company and propelled then-candidate Trump to be seen as a “valued customer.” Per the report:

While Facebook has been reluctant to publicly acknowledge how well Trump used its social network to reach voters, it has celebrated the Republican presidential candidate’s campaign internally as one of the most imaginative uses of the company’s powerful advertising platform.

One Trump campaign employee told BuzzFeed News that Facebook “loved” them; another said, “Trump used Facebook as Facebook was meant to be used.” But Facebook has been less forthcoming about the ways its platform leveraged the campaign.

In April, Bloomberg reported that the Trump campaign tested 5.9 million different versions of Facebook ads, on which the campaign spent $44 million—almost twice what the Clinton campaign spent. And the president is still using the social network to his advantage. The New York Times reported earlier this week that Trump is spending more money on Facebook advertising than any other political figure.