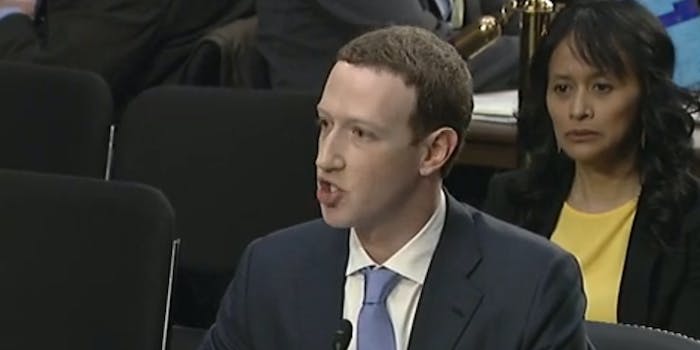 Sen. Lindsey Graham (R-S.C.) tried to hammer home the point that Facebook was a monopoly in the social media field on Tuesday afternoon, and while Facebook CEO Mark Zuckerberg denied the idea, he wasn’t great at articulating it.

Zuckerberg, testifying before the Senate Judiciary Committee and Senate Commerce, Science, and Transportation on Tuesday afternoon, rejected the idea that Facebook was a monopoly, despite being the largest social media platform by a considerable margin, but seemed to get caught up under a line of questioning by Graham.

The exchange between Graham and Zuckerberg got awkward when the senator asked about Facebook’s competitors, essentially trying to argue that the company’s users don’t have other comparable choices when it comes to social media.

When Graham started, he simply asked what Facebook’s biggest competitor was. Zuckerberg, trying to answer Graham’s question, said he would have trouble naming one.

“Do you want just one? I’m not sure I can give one,” Zuckerberg said. “Can I give a bunch?”

Zuckerberg said his company overlapped with companies like Microsoft, , Amazon, and Google in “different ways,” and provided the same services in “different ways”–essentially proving the senator’s belief that there is not another social media option exactly like Facebook for other people to use.

“If I buy a Ford and it doesn’t work well and I don’t like it, I can buy a Chevy,” Graham said. “If I’m upset with Facebook, what’s the equivalent product that I can go sign up for?”

“What I’m talking about is there real competition you face–because car companies face a lot of competition, and if they make a defective car, it gets out into the world and people stop buying that car, they’ll buy another one. Is there an alternative to Facebook in the private sector?”

Sen. Graham asks Zuckerberg about Facebook's competition, "You don't think you have a monopoly?" https://t.co/NPHrJM7GGX https://t.co/ETPTvR1wwp

After going back and forth, Graham finally asked him if he thought he had a monopoly.

“It certainly doesn’t feel like that to me,” Zuckerberg said.