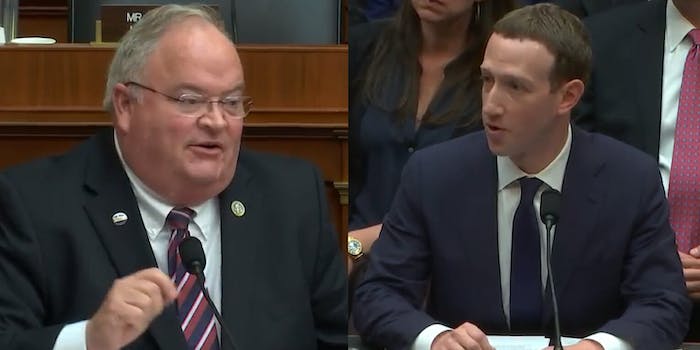 Rep. Billy Long was very interested in what FaceMash was.

Facebook CEO Mark Zuckerberg was asked about something he’d probably like people to forget during his testimony on Wednesday in front of Congress: FaceMash.

Rep. Billy Long (R-Mo) brought up the website, which asked people to vote on the attractiveness of students at Harvard University, so Zuckeberg had to discuss the website he created in the early 2000s under oath in front of the House Energy and Commerce Committee.

He even took a swipe at The Social Network, a movie that dramatized the creation of Facebook.

Here’s how the exchange between Facebook’s founder and Long, who genuinely didn’t seem to know the history of FaceMash, went:

“What was FaceMash and is it still up and running?” Long asked.

“No, congressman, FaceMash was a prank website that I launched in college, in my dorm room, before I started Facebook,” Zuckerberg said, slightly smirking. “There was a movie about this, or it said it was about this—it was of unclear truth—and the claim that FaceMash was somehow connected to the development of Facebook–it isn’t, it wasn’t.”

“It was in 2003… I took it down… it actually has nothing to do with Facebook,” he responded.

“You put up pictures of two women and decide which one was the better, more attractive of the two, is that right?” Long asked.

After a beat, Zuckerberg continued:

“Congressman, that is an accurate description of the prank website that I made when I was a sophomore in college.”

.@USRepLong: "What was FaceMash and is it still up and running?"

Mark Zuckerberg: “No Congressman, FaceMash was a prank website that I launched in college, in my dorm room, before I started Facebook." pic.twitter.com/W1KK99ljrF

Long responded by saying Zuckerberg had come “a long way” from FaceMash.

The internet clearly enjoyed the fact that FaceMash was brought up during a congressional hearing.

"What was FaceMash and is it still up and running?" pic.twitter.com/q9URr7qrcO

Is FaceMash still up? congressman asks for a friend probably.

I don’t think Zuck would have imagined back in 2004 that Facemash would be trending as one of the top 5 topics on twitter.

Which Winklevoss twin slipped this goober a bitcoin to get him to ask about FaceMash? @winklevoss @tylerwinklevoss https://t.co/bLNdohBqHR

Zuckerberg today after being asked about facemash: pic.twitter.com/xSVNK0P1ua

No lawmaker has yet to ask Zuckerberg about “poking” people on Facebook.