While following an account isn’t necessarily an expression of support or even agreement with its views or goals, that still means that a half million people are interested enough in Anonymous to follow the account—a significant milestone by any measure. And for an organization that seeks publicity in nearly everything it does, that may be enough.

The followers range from teenage girls and elderly men to renowned graffiti artist Shepard Fairey and media insiders, such as Wired’s social-media manager, Arikia Millikan. It’s a big showing for a “fringe” movement often demonized, or at best misunderstood, by mainstream media.

There’s no indication that the person or people who run @YourAnonNews participate in hacks, but he or she clearly support the actions of Anonymous. @YourAnonNews retweets Anonymous-related shares, global protest and human rights news, Internet censorship and memes, and even photos of nail-polish decals done in the shape of Guy Fawkes masks. (The masks are the closest thing Anonymous has to a trademark look.)

@YourAnonNews was, of course, ecstatic over the news and celebrated with some Twitter art. 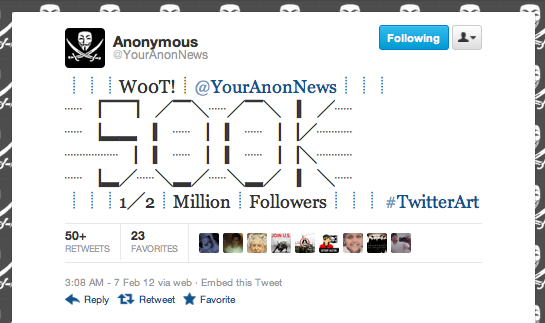