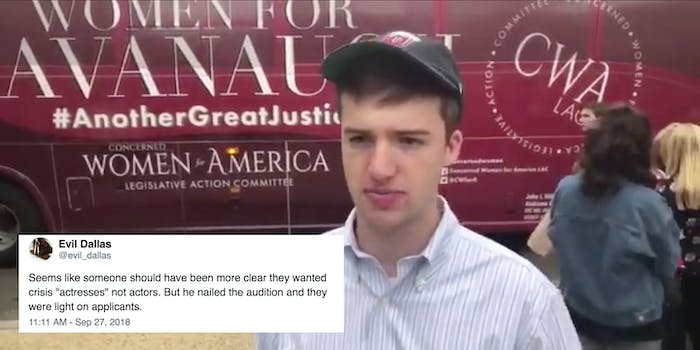 The protesters showed up in D.C. ahead of Kavanaugh's testimony.

Activists arrived in Washington, D.C., on Thursday wearing “Women for Kavanaugh” shirts in support of Supreme Court nominee Brett Kavanaugh before his testimony addressing sexual assault allegations. Mocking common rhetoric of the far-right, some people on Twitter suggested that the protesters are “crisis actors.”

The “Women for Kavanaugh” group included members of Concerned Women for America, a conservative activist organization, and students from Virginia’s Liberty University, a Christian school, the New York Post reports.

According to a Facebook event titled “DC Trip to Support Judge Kavanaugh,” the student organization Young Women for America at Liberty University offered “an excused absence from class and a free trip” to the rally to students who chose to participate. The organization did not immediately respond to the Daily Dot’s request for comment.

This morning in DC there are protests and rallies outside Dirksen Bldg where #KavanaughHearings are being held. This group wearing shirts “Women For Kavanaugh.” #NBC4NY pic.twitter.com/dP2yuwg3Bj

One Liberty University student told News2Share editor Ford Fischer that he’s supporting Kavanaugh “even if it turns out he’s guilty” because of the judge’s stances on abortion.

“I really hope he gets in personally because I want abortion to stop… even if it turns out he’s guilty, I think I’m still gonna support him and hope he gets in because it’s our chance to end abortion.”

-Liberty University student who came to DC on “Women for Kavanaugh” bus. pic.twitter.com/O1VFA7kt30

Imitating the conspiracy theories that often emerge from the right accusing activists of being crisis actors, tweets (some more joking than others) alleged that the people bused in for the “Women for Kavanaugh” group were paid to be there.

Seems like someone should have been more clear they wanted crisis "actresses" not actors. But he nailed the audition and they were light on applicants.

Crisis actors, brought in on busses.

Others on Thursday applied the term “crisis actor” to Kavanaugh himself and his daughters, whom he spoke about during his testimony.

GOP is always calling people "crisis actors," but Kavanaugh is the only one I see 🤔 #kavanaughhearings

Most of the tweets had a facetious tone, but very real accusations of crisis acting have been lodged against left-leaning activists in the past. In one extreme example, YouTube videos labeled Parkland shooting survivor and gun regulation activist David Hogg as a paid actor. The accusations, which were backed with no factual evidence and were refuted by Hogg’s father, cropped up among other conspiracy theories that claimed the mass shooting that left 17 dead at a high school in Parkland, Florida, was a hoax.

Kavanaugh answered questions before the Senate Judiciary Committee on Thursday afternoon. His testimony came after that of his accuser, Christine Blasey Ford, who says Kavanaugh assaulted her at a party when they were in high school.