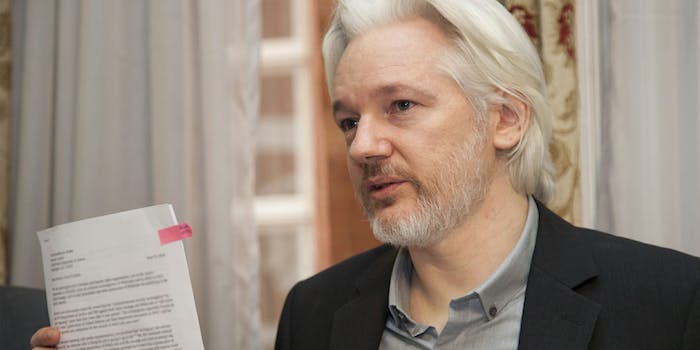 WIkiLeaks tells Twitter the White House op-ed writer is an older, conservative man. What a revelation.

WikiLeaks has done it again. The Julian Assange-fronted group of hacker activists, whose purpose is to obtain and expose high-level government secrets, has gotten to the bottom of the mystery of who wrote the anonymous op-ed in Wednesday’s New York Times.

Sort of—they have a general idea of who it might be.

WikiLeaks released a tweet on Friday showing the results of detailed language analysis they used to determine the writer’s identity. According to their research, the writer of the op-ed is likely a conservative older male.

Based upon our statistical analysis of the language used in the New York Times anonymous Op Ed, the author is likely to be an older (58%), conservative (92%) male (66-87%). Sources should protect themselves by consulting "adverserial stylometry" and "forensic author profiling". pic.twitter.com/yfU22OveTq

Unfortunately, that doesn’t narrow down the field too much. Likely all of President Donald Trump’s senior staff would identify as conservative; they wouldn’t get too far if they didn’t. And with the exception of Kellyanne Conway, Nikki Haley, Betsy DeVos, Ben Carson, Jared Kushner, and Ivanka Trump, every visible member of Trump’s cabinet and high-level staff is an older white man.

So unless there’s some rogue young progressive non-male person convincingly writing op-eds in John Kelly’s voice, we’re not much closer to the writer’s identity.

Predictably, Twitter had a nice laugh at Assange and company’s expense.

Based on the makeup of the White House, no shit sherlock

Shit…I had Nicki Minaj in my office pool.

I was right….. here is the bulll S**t analysis you showed that no one could read.. it is an analysis of English novels…. Scumbuckets pic.twitter.com/L7HBfwENl0

The White House apparently has a list of 12 suspects who they believe could have written the op-ed. Attorney General Jeff Sessions, Secretary of State Mike Pompeo, and Vice President Mike Pence, among others, have denied writing the inflammatory piece.

The op-ed assures readers that the writer and others are doing everything they can from inside the White House to thwart the Trump’s worst impulses, short of confronting him, invoking the 25th Amendment, resigning or coming forward with their concerns. The editors of the New York Times are the only members of the press who know the writer’s identity. In a press conference Thursday, Sarah Huckabee Sanders declared that the identity of the writer was not known to her.

WikiLeaks also suggested that the writer use “adverserial stylometry” and “forensic author profiling” to protect themselves.