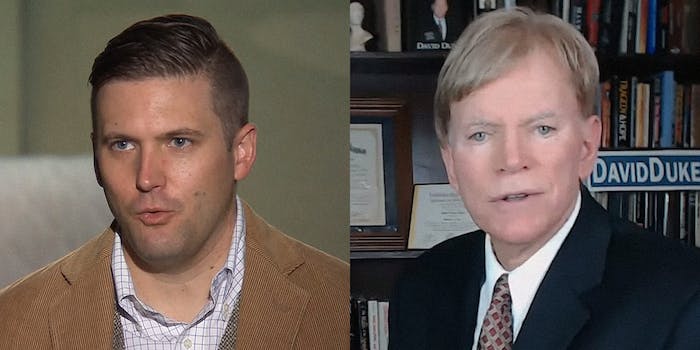 White nationalists are beginning to turn on the man many once referred to as 'Glorious Leader.'

David Duke, a former Louisiana politician infamous for his days as the leader of a sect of the Ku Klux Klan, has changed his tune about Donald Trump — who he vehemently supported throughout last year’s campaign.

“We haven’t abandoned Trump, but we expect Trump to fulfill his promises,” Duke said. “He made specific promises to the American people. And if he doesn’t keep those promises, our support is not unconditional.” Trump was endorsed by Duke early in his campaign (and roundly criticized for failing to immediately disavow that support).

The turning point for Duke and many of his ilk was last week’s military strikes against Syria, a betrayal of the nationalist “America first” platform Trump ran on. Duke, like other white nationalists, credits the airstrikes launched last week to Trump’s son-in-law, Jared Kushner, one of the president’s top advisors who appears to have stolen the president’s ear from Steve Bannon, the longtime golden boy of the “alt-right.”

Duke is not the only white nationalist who is losing faith. Richard Spencer, the de-facto — and occasionally punched — face of the “alt-right” movement, went even further with their disdain for Trump. In a video posted online on April 7, Spencer said, “I am deeply disappointed in Donald Trump. I’m shocked, and I’m angry. And I am ready to condemn Donald Trump.”

The following day, Spencer, carrying a sign that read “No more wars 4 Israel,” held a protest in front of the White House condemning the Syrian airstrikes.

Kushner, who is Jewish, seems to be the focus of the white nationalist rage towards Trump.

“The fact remains that all of us, myself included, may have grossly underestimated the impact of the Jews inhabiting Trump’s inner circle,” Brad Griffin, aka Hunter Wallace, wrote on his blog, Occidental Dissent, after the airstrikes. He went on to say the influence of Kushner and his wife Ivanka “corrupted everything that we found so appealing about the rise of The Don.”

Kushner became the target of a vicious social media campaign, with hashtags like “#Firekushner,” “#kushneratwar,” and “#kushnerswar,” trending on Twitter, mentions of which — that have now topped more than 300,000 — were often accompanied with anti-Semitic memes and comments. And Duke was leading the charge.

“This is what happens when America is led by Jewish supremacists,” Duke tweeted. “These traitors put #IsraelFirst while we pay the price. #NoWarsForIsrael.”

The Duke-Trump relationship dates back to last year, when Duke — whose name is often synonymous with antisemitism and bigotry, charges he denies — made headlines by endorsing Trump’s candidacy. Despite an uproar of calls to immediately disavow Duke’s endorsement, Trump declined, even claiming at one point that he knows nothing about the former Klansman (which was a lie — Trump ended a brief 2000 Reform Party bid for president, in part, by disparaging Duke, calling him “not the company I wish to keep.”) Trump eventually wrote off Duke’s endorsement, calling him “a bad person, who I disavowed on numerous occasions over the years.”

Despite Trump’s comments, Duke — whose nationalistic ideology earned him the title of “Donald Trump before there was a Donald Trump” in certain “alt-right” circles — supported Trump throughout the campaign and even piggybacked off of Trump’s popularity amongst the far-right during his own bid for a seat in the U.S. Senate last year, a race he lost in the primary.

“It’s time to stand up and vote for Donald Trump for president and vote for me, David Duke for the U.S. Senate,” Duke said in a robocall, originally obtained by BuzzFeed. “Unless massive immigration is stopped now, we’ll be outnumbered and out-voted in our own nation. It’s happening.”

Despite his newfound lack of faith in Trump, Duke still considers him an important part of the white nationalist, anti-zionist movement.

“Trump is an idea,” Duke said. “The Trump movement…his doctrine…that’s why he got the support. It wasn’t about a love affair with Trump…our dedication was to the Trump doctrine. He became like a meme, [and] he’s been a great service to the idea.”