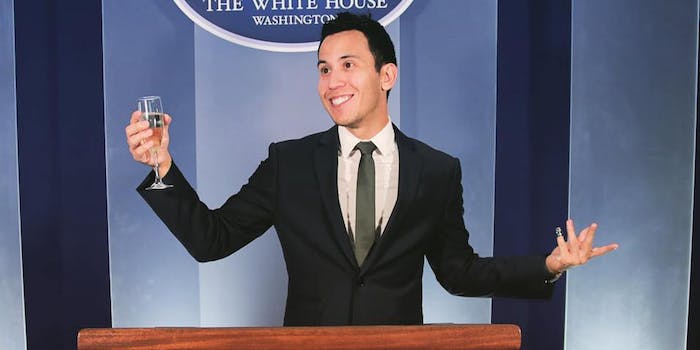 That’s the takeaway of an article in the conservative Washington Examiner that’s taking major heat on social media for obvious reasons.

In “The privilege pyramid,” Eddie Scarry writes scathingly of the social justice movement that wants to reorder the hierarchy into an egalitarian construct. In his view, seeking equality for all, regardless of gender identity, race, wealth, etc., is tantamount to oppressing rich white guys.

Scarry, who seems to have never looked up the definition of the words “justice” and “equality,” writes that the purpose of the social justice movement is “to remake society from top to bottom.”

Scarry, the author of the unironically-titled Privileged Victims: How America’s Culture Fascists Hijacked the Country and Elevated the Worst People from which the article is adapted, believes that the aim of social justice movements is to “eradicate meritocracy” and put the most victimized members of society at the top of a new hierarchy, instead of at the bottom where they apparently belong.

“Social justice is centered on who can claim the highest form of oppression, grievance, and victimhood at any given moment,” he writes. “It’s an endless competition in claiming to have been the most exploited, most subordinated, and most abused.”

For those unwilling to slog through 2,000 words on the plight of rich white men, the Washington Examiner commissioned an illustration of Scarry’s vision of this new hierarchy.

“Rape victims” are at the top, followed in order by “transsexual,” then “queer” and “refugee,” and so on. At the bottom of the pyramid it has “white,” “male,” “wealthy,” “college-educated” and “hetero.”

The astute co-chair of the Minnesota Transgender Alliance, Liz Lilly, tweeted a photo of the illustration from the print version of the Examiner.

“Who knew that being a TRANSSEXUAL put us at almost the top of the privilege pyramid?” she tweeted. Via messenger, she confirmed to the Daily Dot that she was pointing out the ludicrousness of the assertion that being oppressed somehow confers privilege and noting that the term “transsexual” is considered “dated and out-of-touch” by members of the transgender community.

“Whatever the author sees as privilege (maybe having an outsized voice?), we would gladly give up in return for not having high unemployment, family rejection, etc. Most of the groups above that ‘lowest” tier would probably agree,” Lilly added.

Others were similarly stunned that anyone who lives in this society could entertain the notion that straight, rich, educated, white men aren’t the most privileged, and rape victims are. Stories of trauma flooded the comment section.

“Wow I forgot how privileged I was to be [roofied], beat up, raped, and left for dead by two men on a beach,” tweeted one.

“Who would have thought that getting incurable disabling trauma from sexual violence was the biggest privilege of all,” another said.

There were jokes, of course, most of them dripping with irony.

There is at least one silver lining for the straight, rich, white men who share and fear Scarry’s view of society: If he’s right, then they will become the least privileged, and will in turn be able to claim the greatest victimhood, thus then resuming their place at the top of the privilege pyramid.