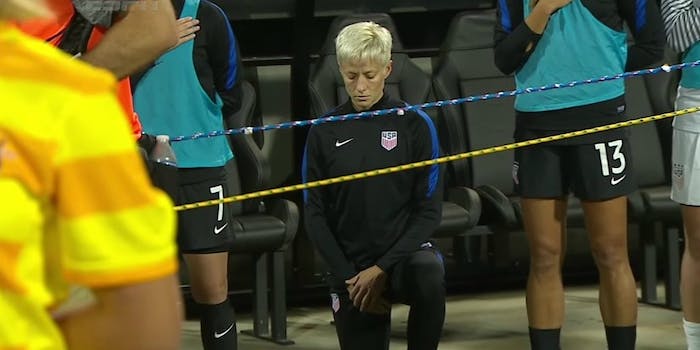 U.S. Soccer mandates its players stand for the national anthem

For the first time in American sports, a major organization has mandated that its team members stand for the national anthem. As reported by Fox analyst Stu Holden, a new U.S. Soccer policy says that team members must “stand respectfully during the playing of national anthems” whenever the federation is represented.

According to Holden, U.S. Soccer President Sunil Gulati said there were no preset consequences for anybody who didn’t obey, and it sounds like the federation will deal with the issue if somebody doesn’t stand at attention.

But clearly, the rule is aimed at avoiding the protest made last year by Megan Rapinoe, who took inspiration from former 49ers quarterback Colin Kaepernick and his habit of kneeling during the national anthem.

“It was something small that I could do and something that I plan to keep doing in the future and hopefully spark some meaningful conversation around it,” Rapinoe said at the time. “It’s important to have white people stand in support of people of color on this. We don’t need to be the leading voice, of course, but standing in support of them is something that’s really powerful.”

She also said that as a gay woman, she’s placed her hand over her heart during the national anthem and felt at times like this country hasn’t protected her liberties.

But the stances of Kaepernick (and Rapinoe) also sparked outrage, and at the time, U.S. Soccer said there was an expectation that all team members stand for the “Star Spangled Banner.”

Gulati gave his opinion on Rapinoe’s protest last November when he told FourFourTwo, “There is a right to free speech; she also has the obligations to putting on a national team uniform. And we think those are pretty strong when you’re representing the U.S. national team and wearing the crest.”

Here was how the players’ association for the U.S. Women’s National Soccer team responded.