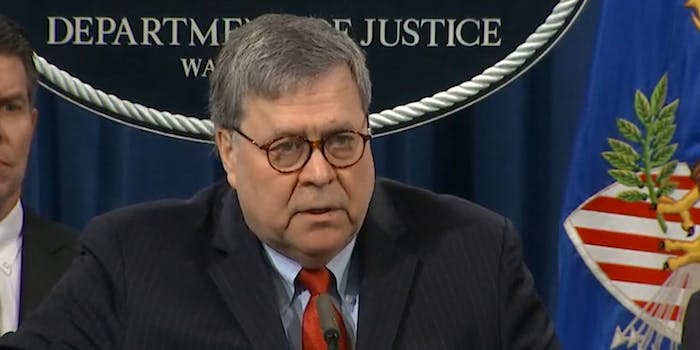 William Barr said the 'scale of the theft was staggering.'

Attorney General William Barr on Monday announced that the Department of Justice (DOJ) has charged four Chinese military members with allegedly hacking into Equifax in 2017, resulting in one of the largest data breaches in history.

Equifax, the credit reporting agency, said hundreds of millions of Americans had their data compromised after a breach in 2017. The information that was exposed included names, social security numbers, addresses, and more.

In a press conference on Monday, Barr said the “scale of the theft was staggering.” The DOJ alleges the hackers used a vulnerability in Equifax’s dispute resolution website and obtained login credentials that could be used to navigate the agency’s network.

“In short, this was an organized and remarkably brazen criminal heist of sensitive information of nearly half of all Americans, as well as the hard work and intellectual property of an American company, by a unit of the Chinese military,” Barr said in a statement released amid the announcement.

Officials said at the press conference that they have not seen evidence that the stolen information was being used.