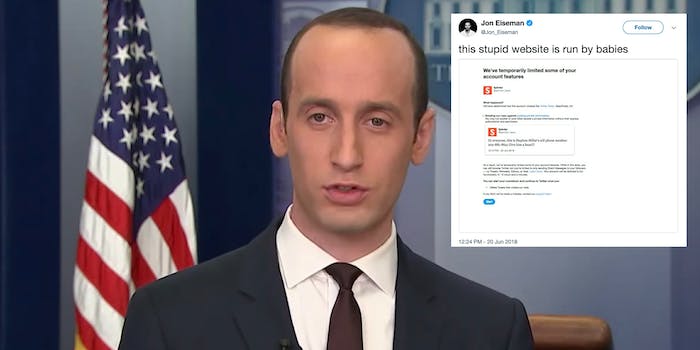 Did the censorship go too far?

A report earlier this week said Miller found delight in seeing photos of immigrant children being separated from their parents. So news website Splinter responded Wednesday by publishing his personal phone number, suggesting readers “call him about it.”

But Twitter has a policy against sharing the personal data of public figures on its platform. So after Splinter published the article with Miller’s phone number, the platform temporarily blocked reporters from the publication, the publication itself, and anyone else directly tweeting the phone number.

Then Twitter went a step further, blocking people who were just sharing Splinter’s article, not the number itself. According to Engadget, Twitter has previously blocked accounts tweeting URLs to files violating policies but never mainstream news reports.

In a statement to Engadget, a Twitter spokesperson confirmed that it blocked accounts sharing Splinter’s article. Since Miller’s cell phone number has since been deactivated, Twitter is no longer taking action against users sharing it.