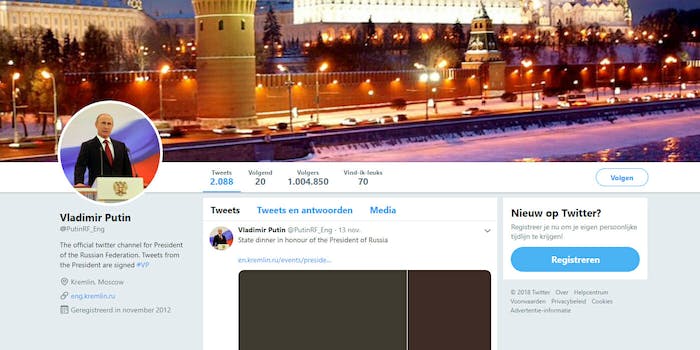 Twitter announced on Wednesday that it has suspended an account they say was impersonating Russian President Vladimir Putin.

The social media site said that the account, @putinRF_eng, was suspended after a “valid report” it received from Russian officials.

“We suspended @putinRF_eng for impersonation based on a valid report we received from Russian officials,” the company wrote in a tweet, citing its impersonation policy.

We suspended @putinRF_eng for impersonation based on a valid report we received from Russian officials. Our impersonation policy can be found here: https://t.co/PIBC4nGI8H

As of earlier this month the account had more than 1 million followers and mostly tweeted about the Russian president’s appearances. The account was created in November 2012.

A spokesperson for the social media site told Reuters that the account was not affiliated with Putin.

There is an official account for the Kremlin, @KremlinRussia_E.