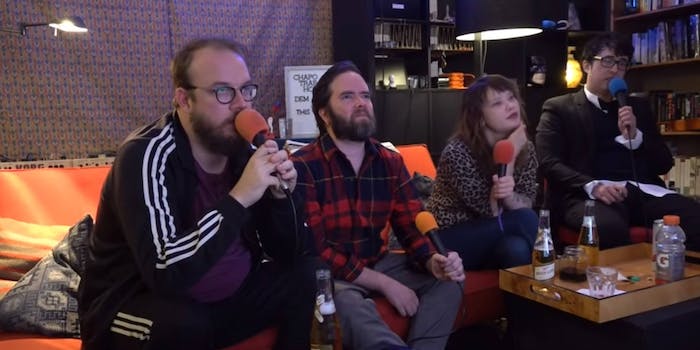 A mysterious organization hit the channels with copyright strikes.

During Tuesday night’s Democratic debate, several Twitch channels streaming the event alongside their own commentary suddenly went dark at the same time.

Channels such as Chapo Trap House, Trihex, BadBunny, the Serfs TV, David Pakman, and The Majority Report received 24-hour suspensions for their coverage of the event.

All channels affected by the suspensions were streaming under Twitch’s “Politics” category when the takedowns occurred. Hasan Piker, arguably Twitch’s most popular political streamer, happened to be streaming the debate under the “Just Chatting” category and was unaffected.

Following the takedowns, one of the affected channels, The Serfs TV, made the discovery that the entity that flagged its content for violating the Digital Millennium Copyright Act (DMCA) was not CBS, the network actually airing the debate. DMCA takedowns on Twitch can be issued by organizations that believe their content is being rehosted in a non-transformative manner.

The strikes originated from an organization, known only as “Praxis Political Legal.” Praxis claimed in its takedown messages that the streamers were rehosting CBS News’s copyright-protected work without permission, regardless of additional commentary.

Praxis Political’s official site is incredibly bare-bones. Its “About” section says that the company “works with, and on behalf of, clients in the media, consulting, policy, politics, and campaigns.” Its “Contact” section does not contain any actual method for contacting the organization.

After the streamer suspensions, Praxis Political Legal appears to have removed its only contact email from its website. Attempting to email the address in the first place, however, returns an error as the address does not actually exist.

The shadiness of these circumstances led to some claiming that CBS was secretly behind the takedowns and using Praxis Political as a deflective shield. “CBS News has hired a high-priced political consulting firm…to shut down independent media commentary of tonight’s debate, like ours,” wrote political pundit David Pakman.

The suspension for a first-time DMCA violation on Twitch is at minimum 24 hours but can range all the way up to two weeks. Given the fact that Trihex and BadBunny have previously had run-ins with DMCA strikes, it is likely that their bans will last longer than other affected channels.