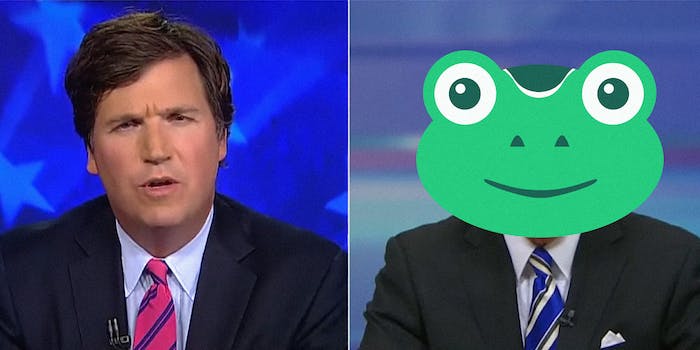 Gab's founder now thinks the site will be overrun with liberal trolls.

Fox News host Tucker Carlson wants you to jump on the hot new social network Gab, a site favored by white supremacists. Meanwhile, Gab’s founder wants all you liberal trolls who just learned about the site to know that he’s onto you.

During his popular prime time show on Tuesday night, Carlson lamented Silicon Valley giants ostracizing Gab for allowing rampant hate speech from its users and urged his audience to join the social network.

Gab promotes itself as an “ad-free social network for creators who believe in free speech, individual liberty, and the free flow of information online.” In practice, this means minimal moderation of user content, which has drawn in a user base that often touts far-right talking points, including white nationalist, white supremacist, and other “alt-right” views.

For example, one of the most popular Gab posts on Wednesday morning came from Andrew Anglin, founder of notorious neo-Nazi site Daily Stormer, who called on fellow users to help him create a system to “track” Jews.

Google booted Gab’s app from the Google Play store last month “because it violates the hate speech policy” of the app store. Apple has also rejected the app on similar grounds.

The tech giants’ rejection of Gab furthers the narrative that Silicon Valley companies are hostile to conservative views (or, in this case, hate speech), bolstered by Google recently firing an employee for which prompted Carlson’s segment with Gab founder Andrew Torba.

As BuzzFeed News reports, Torba took a screenshot of a Latino startup founder’s Facebook post lamenting Trump’s election win. “Tomorrow, being a Hispanic, Black, Muslim or woman in the USA is going to be very scary,” Aniza Mirza, co-founder of Giveffect, wrote. In his screenshot, Torba wrote, “Build the wall.”

After other members of the Y Combinator community chastised Torba’s comment, he responded by telling everyone to “fuck off” and praised himself for helping “meme a president into office”:

All of you: fuck off. Take your morally superior, elitist, virtue signaling bullshit and shove it.

I call it like I see it, and I helped meme a President into office, cucks.

A number of new Gab users say they were drawn to the site after hearing about it from Carlson.

Torba, however, predicts an influx of an entirely different type of new user: liberal trolls. In a Periscope video, Torba calls out anyone who might post illegal content, such as ISIS videos or child pornography, in an attempt to paint Gab in a more negative light.

In other words: Don’t even think about trying to ruin this safe space for bigots.