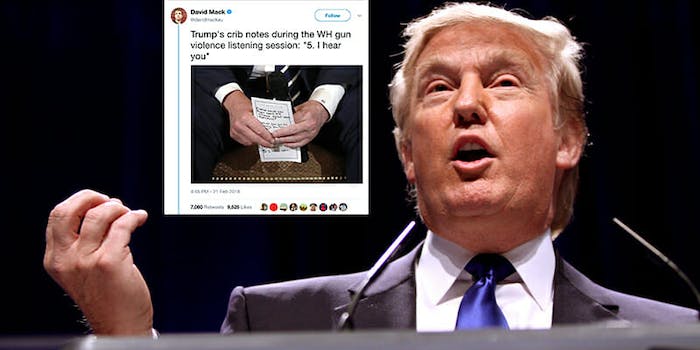 He needed the reminder.

During a meeting on Wednesday with survivors of the school shooting that killed 17 people in Parkland, Florida, President Donald Trump’s personal notes seemed to remind him to practice appearing empathetic.

Associated Press photographer Carolyn Kaster snagged a shot of Trump’s crib notes from the meeting, which seemed intended to guide the president through the session. The image instantly went viral on Twitter.

There were five points visible on the notes, including four that seemed to be questions to help Trump prompt the conversation with the shooting survivors:

1. “What would you most want me to know about your experience?”

3. “Do you see [unclear] something effective?”

The last visible point on the slip of paper was not a question. It appeared to be a reminder to say an empathetic line: “5. I hear you.”

During the listening session, survivors of the fatal shooting last week at Marjory Stoneman Douglas High School and other mass shootings, as well as parents of students who died at Stoneman and in the 2012 Sandy Hook school shooting, signaled support for stricter gun control measures.

Andrew Pollack, whose 18-year-old daughter Meadow Pollack was killed after being shot nine times by gunman Nikolas Cruz, said he was “pissed” at the lack of protection for students.