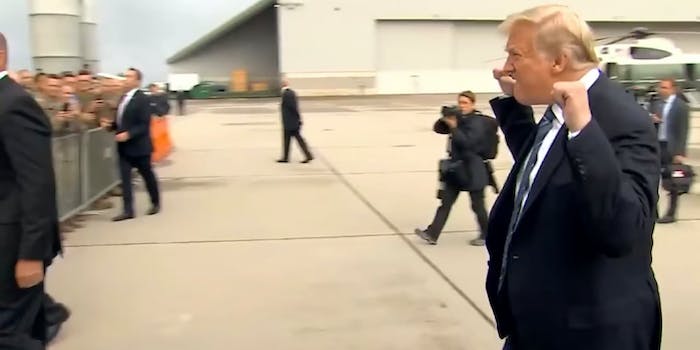 In case you missed it Tuesday, Trump and the first lady were in Shanksville, Pennsylvania, and headed to a memorial service for people who died on Flight 93. Trump, literally never one for decorum, entered the scene with both fists raised and his jaw clenched as if he were headed pretty much anywhere besides a somber event.

Comic artist and writer Rob Sheridan then took the liberty of turning the photo into a PNG cut-out, inviting Twitter at large to “do your absolute worst” with the image by way of Photoshop.

People on Twitter were happy to oblige, inserting fist-pumping Trump into scenarios ranging from giving president of Russia Vladimir Putin a piggy-back ride to eating corn on the cob to flossing his dentures.

Well, I made this before I saw your png, but I'm happy! pic.twitter.com/8UIOawLu68

Lots of people had the idea to place the Trump image in the scenes of historical tragedies, from the Charlottesville rally to the Titanic sinking. Given the original photo came from a 9/11 memorial, it’s not so hard to imagine him having the same reaction in an equally inappropriate setting.

And another one, the metaphorical equivalent of Trump's response to charlottesville. pic.twitter.com/S1sHOIqCQd