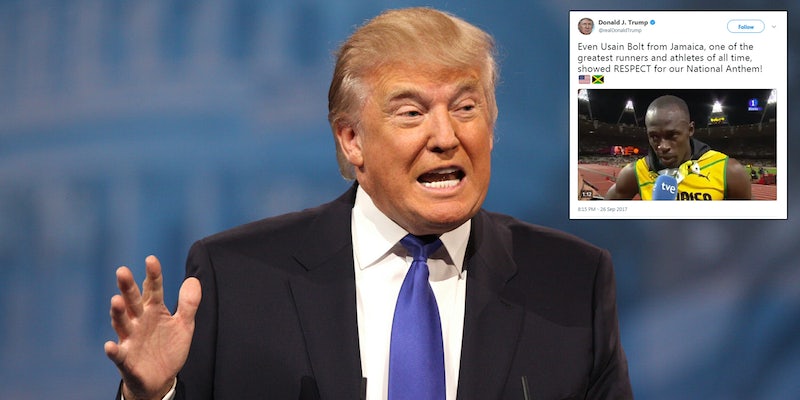 The response was swift.

President Donald Trump attempted to use a clip of Jamaican Olympic athlete Usain Bolt to defend his much-criticized slamming of NFL players who protest during the national anthem–but it didn’t work very well.

Trump tweeted a video of Bolt cutting from a television interview to stand silently for the national anthem, saying that he showed “respect” for the United States.

“Even Usain Bolt from Jamaica, one of the greatest runners and athletes of all time, showed RESPECT for our National Anthem!” Trump tweeted.

But Team Jamaica, a website dedicated to the island’s sports, quickly told Trump they wanted no part of his false equivalency.

“Please leave The Boss out of your politricks,” the website tweeted in response to Trump.

Please leave The Boss out of your politricks. https://t.co/jMi4r4ajEL

After that, things escalated quickly. Trump continued to tweet about protests in the NFL, urging the league to “fire or suspend” players who don’t stand for the anthem, but added that his resentment has “nothing to do with race” despite the fact that Kaepernick first began kneeling during the anthem in 2016 to protest racism and police brutality against people of color.

During Sunday’s games, players, owners and other staff members across the league took a knee during the anthem or locked arms in solidarity in response to Trump’s attacks.