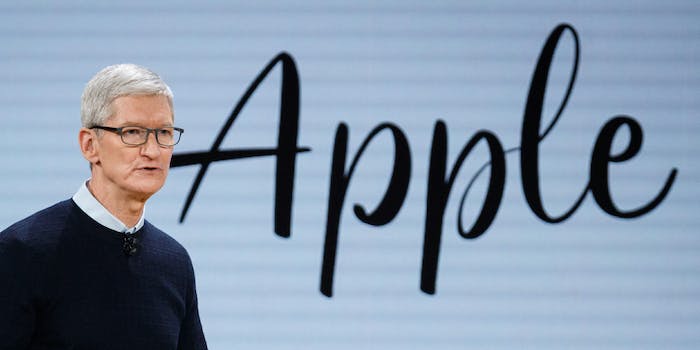 On Thursday, the whole nation watched as the president made a slip of the tongue that was somewhat humorous and extremely inconsequential. It sparked immediate memes and an apparent clapback.

If there’s one defining trait of Trump, it is an inability to let any petty slight go, and so we are now on day three of the president trying to save face.

It began with an edit of the White House transcript, tossing in an em dash into the official transcript to look like the president paused and pivoted away.

Then, on Saturday, he told RNC donors he very quietly said Cook’s last name, according to Axios.

Trump told the donors that he actually said “Tim Cook Apple” really fast, and the “Cook” part of the sentence was soft. But all you heard from the “fake news,” he said, was “Tim Apple.”

And this morning, his story has switched again as he tweeted about it: “long after formally introducing Tim Cook of Apple, I quickly referred to Tim + Apple as an easy way to save time & words.”

At a recent round table meeting of business executives, & long after formally introducing Tim Cook of Apple, I quickly referred to Tim + Apple as Tim/Apple as an easy way to save time & words. The Fake News was disparagingly all over this, & it became yet another bad Trump story!

It does not take a long time to say the word “Cook,” which has one syllable. It’s not clear if this strategy of keeping it in the news is effective.