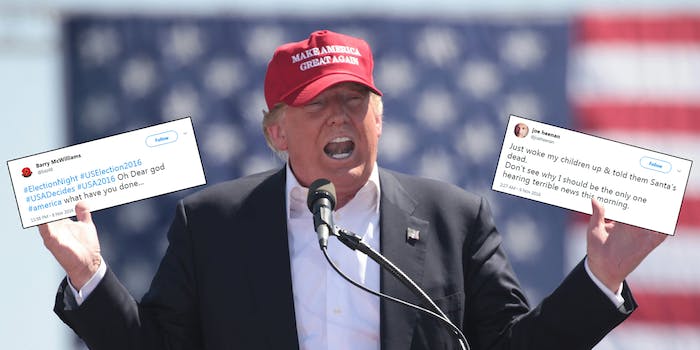 One year ago, America woke up to Donald Trump’s victory. It’s been getting more woke ever since.

One year ago today, America woke up to the reality that it had unexpectedly elected Donald Trump to be the 45th president of the United States.

Given how divisive and nasty the election had become in the months prior, it was no shock that Twitter reacted in dozens of ways to the news that Trump had defeated Democrat Hillary Clinton. Despite his rival earning approximately 3 million more votes than him, a triumph in the Electoral College propelled Trump to victory.

Most of you reading this probably remember where you were when you heard the news and remember how you felt—good, bad, ugly, scared, elated, or frustrated. You weren’t alone in feeling that way, and you’re not alone feeling a mix of those emotions on a daily basis over the past 365 days.

A lot has happened since last year (seriously—it’s absurd how much has happened). Here’s a look at how people reacted online to last year’s election, in the immediate aftermath.

England: Nothing can be more embarrassing than Brexit.

Just woke my children up & told them Santa's dead.
Don't see why I should be the only one hearing terrible news this morning.

Everyone say's meteorologists are the "only ones that can be wrong & still keep a job". What say you Pollsters? #ElectionDay

I don't even know what to say. Depressed,sad,disgusted,angry & scared 4 my daughters future.4 the U.S & 4 the WORLDS future. #ElectionNight

me when the results first started coming in vs me now pic.twitter.com/ps8iQNviPk

I will never forget this chart for as long as I live. pic.twitter.com/7Y4t4o65gp

I've put everything on the line to support @RealDonaldTrump, bc only he can Make America Great Again.

Hey haters and losers who are saying #notmypresident ! Your tears are delicious! 😂😂😂😂😂😂😂😂😂😂😂 pic.twitter.com/cWDXff9wWF

With elections on Tuesday–which sent a whole host of other emotions flying about–next year’s midterms, and another presidential election in 2020, you can bet there will be more reactions like this (and more) to look forward to.