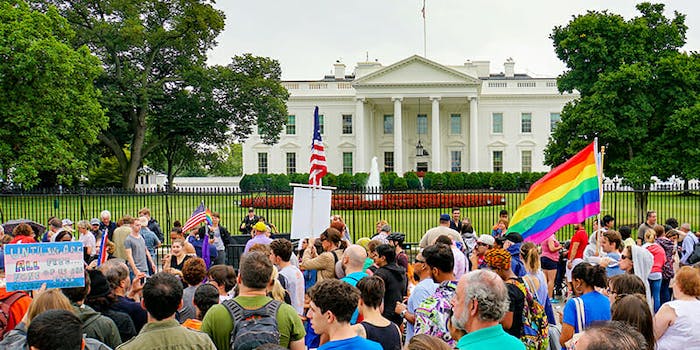 Trump memo bans most transgender people from serving in military

There are 'limited' exceptions.

The Trump administration on Friday moved to formally ban most transgender people from serving in the military, the Hill reported.

The White House memo states that “transgender persons with a history or diagnosis of gender dysphoria—individuals who the policies state may require substantial medical treatment, including medications and —are disqualified from military service except under certain limited circumstances.”

President Donald Trump has been calling for a transgender military ban since last August when he followed up a tweet storm with a memo banning transgender people from enlisting.

The ban has been engulfed in court battles since then, and it was expected that Defense Secretary Jim Mattis would recommend that Trump allow transgender service members to stay in the military. According to the Hill, it’s unclear what the latest memo will mean for the estimated thousands of transgender Americans serving active duty.

Lambda Legal, which along with Out-Serve-SLDN represents former and present service members impacted, had already poised to argue for a “permanent block” against the trans military ban and will head to court on Tuesday.