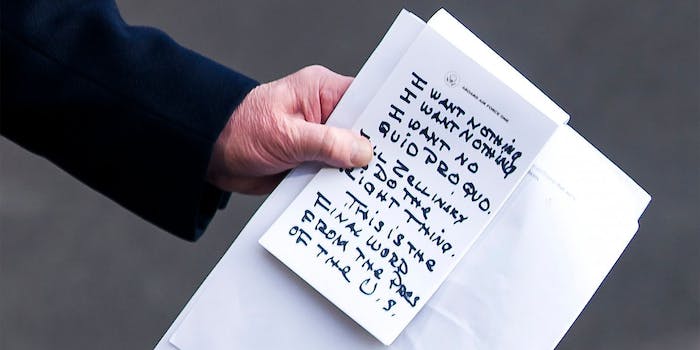 At least something concrete is going to come out of impeachment, even if it’s just Twitter song parodies.

Following Gordon Sondland’s testimony at the White House on Wednesday, Trump addressed the press with a rant quoting the testimony and asserting his innocence. The handwritten note from which Trump spoke—which included “I WANT NOTHING” in all caps—inspired endless mockery on social media, as the scrawlings evoked song lyrics or a manifesto.

The comparison to lyrics inspired a number of Twitter users to set the scrawlings to music. Gizmodo found a number of examples online that are actually… not bad.

Twitter user @NickLutsko opted for a more emo vibe. While some hear notes of Dashboard Confessional, true emo aficionados will identify clear notes of a semi-shouted Brand New chorus off of an early album.

If you are going to go emo, you have to go to the source. Twitter user @victoryrhoad (who makes music under the moniker Panda Plane) took Trump’s words and gave them the Smiths treatment. Just try not to think about the fact that Morrissey’s politics are almost as bad as Trump’s when you listen.

Inspired by @pattonoswalt , here's Trump's notes as if Morrissey wrote them into song, performed by me pic.twitter.com/Emka5wVwzM

While it is a safe bet that Trump will be in office at least until the general election, it is an equally sure thing that these hearings will generate some of the dankest memes of our time. After all, it’s not the high crimes and misdemeanors that really matter; its the memes we made about them along the way.

If, for some reason, you still want more musical interpretations of Trump’s impeachment notes, you can listen to 10 full minutes of “Emo Trump” courtesy of Lutsko—if your constitution is hearty enough to take it.