The NFL is controversial now because Trump said so.

Which do Trump fans love more, the NFL or President Donald Trump? According to the New York Times, it’s not the NFL.

After the president’s vulgar criticisms against NFL players who kneel for the national anthem to protest police violence against Black Americans, and the subsequent backlash from various players and coaches, Trump fans are now much more likely to view the NFL negatively than positively, according to Morning Consult polls. Over 60 percent of Trump voters see the NFL “somewhat or very unfavorably,” the Times reports, while less than 30 percent still see the NFL in a positive light. In comparison, only 10 percent viewed the NFL negatively between May and June, with nearly 75 percent supporting the league. That’s a huge leap downward in less than half a year.

In fact, the NFL is more controversial than most media outlets. The Times lists the NFL as one of the top 10 polarizing brands in the country, with Trump Hotels in first, CNN at second, and MSNBC taking fifth place. But the NFL follows shortly behind at seventh, beating out HuffPost, CBS, ABC News, and even Breitbart News. Yes, one of America’s greatest pastimes is more controversial than a site that literally publishes white nationalist propaganda.

Talk about a polarizing American political landscape. But the Trump fanbase’s disdain for the NFL comes as a particular surprise because the league has a lengthy centrist history.

What, after all, is more American than football? For many, the answer appears to be Trump himself.

Turning America’s pastime into a battlefield

Baseball may be America’s pastime, but football is where Republicans and Democrats set aside their differences. A report from FiveThirtyEight shows that the NFL sits right in the middle between pro-Democrat and pro-Republican sports. Measuring search traffic alongside areas that turned red for Trump and blue for Clinton proves that, while the NBA, MLB, and NHL all lean left, national football is a pretty bipartisan sport compared to right-wing darlings NASCAR, college basektball, and college football.

It’s not just the sport itself that has a centrist political leaning. A national survey from early September reveals that NFL teams have a pretty even split between Democratic and Republican fans. While only six out of 25 football teams’ fanbases lean Republican, and most veer toward the Democratic Party, every team from the San Francisco 49ers to the Dallas Cowboys has a significant percentage of Democrats and Republicans on their benches. In fact, most teams’ fans refused to side with either party when asked. Sports isn’t where national politics are supposed to play out, most football fans seem to suggest. It’s where Democrats and Republicans can sit in the same bleachers and root for the same team.

But that hasn’t stopped Trump fans from deriding the sport as left-leaning, anti-conservative, and anti-American. Looking at Breitbart’s coverage says a lot about Trump voters’ new relationship with the NFL. The right-wing news outlet depicts the NFL Player’s Association as “more concerned with their player’s [sic] First Amendment rights” than “the financial health of the sport.” Another article blames the league itself for “an incredibly contentious year” due to “anthem protests, a watered-down product, and games that last too long.” And one post’s headline reads “The NFL Hates America,” claiming that the NFL’s “indefensible” fines on player uniforms proves the NFL “despises America.”

Once NFL coaches and players pushed back against Trump, the league became an enemy worthy of scorn for Trump supporters. And pro-Trump voices portray the league as a pro-leftist, anti-conservative hate speech bastion. That’s particularly odd because the NFL’s beef with Trump is new. It’s been less than a month. And Trump’s fight with the league was largely started by Trump taking a potshot at Colin Kaepernick, not vice-versa. It’s not like the NFL waged an all-out war with Trump; if anything, Trump landed the first blow.

Any surprise at the NFL’s sudden spike in unpopularity is based on the assumption that Trump supporters are like Mitt Romney or John McCain voters, who seemed to value both candidates more on their political beliefs than their personalities. In reality, Trump’s fanbase is notorious for its hero worship. And its toxicity. These are the kind of right-wing advocates that have their own subreddit dedicated to trolling, praising a president who retweets memes where he strikes his former opponent with a golf ball.

Trump fans look to Trump as something more than just a conservative political figure. It’s the man himself—his unique cocktail of libertarian xenophobia and his unfiltered approach to everything from women to immigrants—that’s so impressive to these supporters. In other words, Trump has a personality cult going on. And whoever crosses Trump crosses his supporters, too.

That means nothing is sacred to Trump fans. Whether that’s the NFL or New York City, DACA recipients or Chelsea Manning. Whoever Trump doesn’t like is public enemy no. 1.

In fact, when some Trump fans feel scorned, they often lump their enemies together. Notorious pro-Trump figurehead Mike Cernovich has repeatedly criticized the NFL in the past year, claiming the NFL supports “Black power” and misandry. He’s called watching football “a cuck activity.”

“The NFL supports cop killers and flag burners,” he wrote in a late September tweet. “#TakeTheKnee is not about Free Speech.”

Of course, research data suggests Cernovich’s claims are false. The league and its fans don’t lean in any political direction, and the sport is largely America’s centrist pastime. So for Trump fans to target the NFL signals a major sign: They feel threatened by the NFL because the NFL became a platform to fight back against the Trumpian worldview. And Trump’s fanbase won’t stop demonizing the league until their leader finally feels the NFL has met his demands—even if Trump is largely to blame for the controversy.

Trump’s fans aren’t going away, even if he leaves office 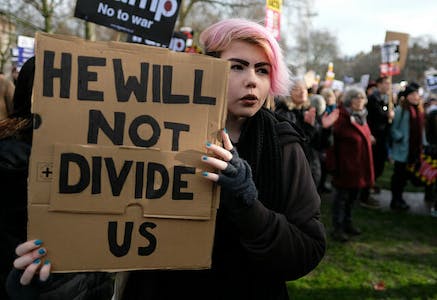 For most anti-Trump activists, impeaching Trump is the main goal. Take Trump out, and his fanbase will slink back into the shadows, forever disgraced. Right?

Notable right-wing provocateur Roger Stone, a long-time friend and former adviser to the president, thinks otherwise. He’s claimed that protests will rip the United States apart if Trump is deposed from office.

“You will have a spasm of violence in this country, an insurrection like you’ve never seen,” Stone said in September, according to the Washington Post. “The people will not stand for impeachment. A politician that votes for it would be endangering their own life.”

The Post explored Stone’s claims and found that Trump’s opponents are much more politically active than his supporters. But Trump voters aren’t exactly sitting at home, either. Over 30 percent are motivated to join a general strike, more than a quarter are willing to attend a protest, and nearly 50 percent are ready to contact their local representative, a Post survey found. The left might be more politically active, but the right isn’t opposed to mobilizing. (Look no further than the Tea Party for evidence of that.) And if Trump supporters are ready to attack the NFL based on pre-game kneeling, then it’s unlikely they’d allow impeachment to go unopposed in the streets.

Trump is despised by degenerate rappers, perverted Hollywood scum & cop-hating NFL players. Makes me proud to know I’m on the right side!

Here’s the reality. When Trump ran in 2015 and 2016, he spoke to a segment of the American public that felt unheard. He substituted Republican dog whistling with blatant calls for deporting immigrants and demonizing movements like #BlackLivesMatter. And now that Trump has spoken to a bigoted crowd, he’s given them a loudspeaker to do as they please. After all, there’s a reason why hate crimes rose in 2016 amid the Trump campaign’s growing popularity. Now, nationalists feel strong enough to organize in Charlottesville, Virginia, carry torches while chanting Nazi slogans, and physically assault their opponents. Let’s not forget Heather Heyer’s death, after all.

Trump’s fans aren’t going away. In fact, they’re right next door. The Southern Poverty Law Center’s Hate Map tracks hate groups in the U.S., and the site lists over 900 groups across the country. Even in states that turned blue during the election, organized bigotry is alive and well. New Jersey hosts over a half dozen hate groups, with nearly 50 in New York. And California has over 70, including neo-Nazi organizations, Ku Klux Klan chapters, anti-Muslim chapters, and anti-LGBTQ groups. That’s a lot of far-right organizing in pro-Hillary Clinton spaces.

Trump spoke to these people and he drew them into action. Impeachment won’t shut them up. Hell, they’re strong enough to take on a fight with the NFL. Kicking Trump out of office won’t end the madness. His base, and the personality cult he’s created, are here to stay in American politics. And that should leave the left worried for the country’s future.