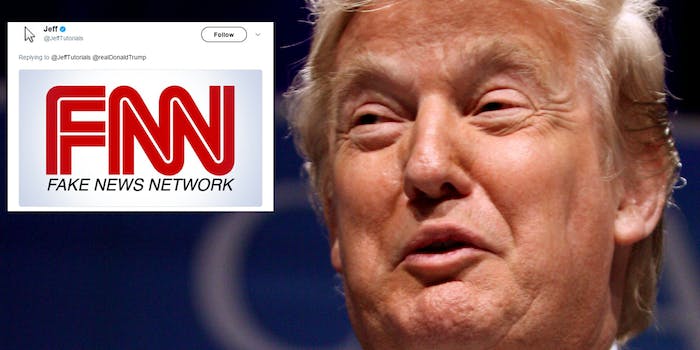 Trump, alt-right go on the attack amid CNN’s Russia woes

Late Monday night, the White House officially announced they believed that a possible chemical weapons attack by Syrian forces loyal to President Bashar al-Assad was imminent. The Congressional Budget Office released its score on the Senate healthcare bill, revealing it would add tens of millions of people to the ranks of the uninsured. President Donald Trump, meanwhile, appears to be enamored with the fact that CNN had to retract a major scoop on his potential ties to Russia.

Over the weekend, the network published a story claiming that Trump supporter Anthony Scaramucci had ties to a Russian investment fund and that a Senate committee was investigating him as a possible go-between for Trump and Moscow.

Almost immediately after Scaramucci challenged the story, which was based on a single anonymous source, CNN retracted the story. The news outlet issued an apology to Scaramucci, who accepted it. Three employees involved in the publication resigned. The news apparently made its way to the president on Tuesday, where it fueled his belief that CNN has been out to get him.

Wow, CNN had to retract big story on "Russia," with 3 employees forced to resign. What about all the other phony stories they do? FAKE NEWS!

Mark Levin: The collusion is among the Democrats https://t.co/Qrca7r01BI

The retraction by CNN has given major fuel those on the right who believe the network has an agenda against Trump. While a retraction—embarassing as it is—should show that the network holds itself to a certain editorial standard, it was not treated in that fashion this morning online, where it was instead seen as proof positive that the network would do whatever it could do to take down Trump.

Amid all of this, conservative raconteur James O’Keefe—who has faced his own accusations of producing false news—published an exclusive video filmed on CNN property, of producer John Bonifield, who was recorded by an employee of O’Keefe’s Project Veritas. In the video, Bonifield was asked why CNN was obsessed with the Russia story, and he said “ratings.”

Good morning @CNN! While you were sleeping, we were reporting. #AmericanPravda pic.twitter.com/GkJXy2zXQN

Bonifield is a producer on CNN Health, working with their medical team. But it’s the kickoff to a campaign by the alt-right they are calling “American Pravda” or “American Truth,” which they claim will ultimately expose CNN and other networks. They are certain these two factors—the retraction and the admission from a CNN Health producer that Russia stories produce big ratings—is unassailable proof the media is colluding against Trump.

We just proved that you are the target of a WITCH HUNT by #FakeNews @CNN. #AmericanPravda https://t.co/VrpKS3f3OF

In the extended version of the video, Bonifield says the Russia story “could be bullshit,” and that he thinks the president is right to call it a “witch hunt.” He added that CNN boss Jeff Zucker said he wanted the staff to stay on Russia after finishing their work with the Paris Climate Agreement.

For those who haven't seen this I urge you to watch. Now let's end the bs and let @realDonaldTrump focus 100% of his energy on #maga https://t.co/bWmDJFwZn4

He has very good instincts about these kind of things. https://t.co/z2WfeJIObb

#AmericanPravda When a cable news network pushes a false narrative 2 boost ratings & undermine our government, someone should go to jail!

Trump, for his part, contradicted the assertion that CNN’s ratings were up, and said that the network would be forced to make major changes.

Fake News CNN is looking at big management changes now that they got caught falsely pushing their phony Russian stories. Ratings way down!

He went on to challenge every other network and two top news outlets, accusing them of also being “fake news.”

So they caught Fake News CNN cold, but what about NBC, CBS & ABC? What about the failing @nytimes & @washingtonpost? They are all Fake News!

Update 12:34am CT, June 27: According to CNN senior media correspondent Brian Stelter, the network notes that John Bonifield is not involved in politics coverage, and they stand by his right to express displeasure with their coverage.