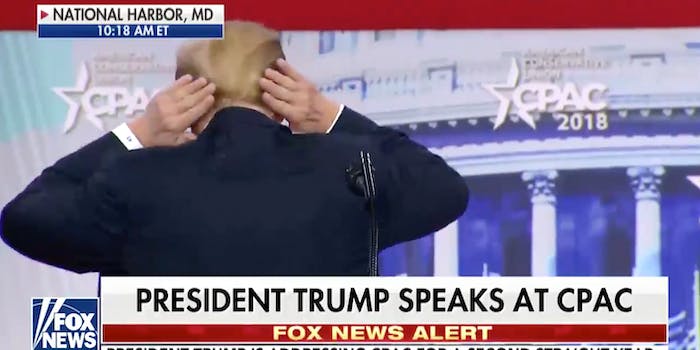 Trump actually cracked a funny joke about his hair at CPAC

Is this Trump's first official statement about his hair?

President Trump felt right at home this week at the Conservative Political Action Conference, an annual event attended by conservative activists and elected officials from across the United States. On Friday, he felt so comfortable on the stage that he candidly discussed the topic everyone wants to know more about—his hair.

After seeing a photo of himself appear on the big screen, he commented that he’d love to see “that guy” speak and then motioned toward the back of his head. He turned around to show the crowd his signature combed-over hairstyle.

“I try like hell to hide that bald spot, folks,” Trump told the crowd. “I work hard at it.”

TRUMP: "I try like hell to hide that bald spot, folks. I work hard at it."pic.twitter.com/HSip6T3ted

Trump’s hair is a favorite subject for Republicans and Democrats alike. The joke was received with laughter, both in real life and on the internet—which never misses a chance to make a jab at the mystery of Trump’s hair.

Trump: “I try like hell to hide that bald spot.” And succeeds about as well as with everything else. pic.twitter.com/xj17Qi8Vpc

TRUMP: “I try like Hell to hide my bald spot.”

This is performance art. pic.twitter.com/HtFQ11eRMc

TRUMP JUST TOLD THE TRUTH AT @CPAC! “I’m trying like hell to hide that bald spot.”

There. I gave him credit for something.

This is the day he became presidential

Earlier in February, Trump’s hair made headlines when he was hit by a gust of wind and revealed that it acts more like a flap over his head than it does as just regular ol’ hair.