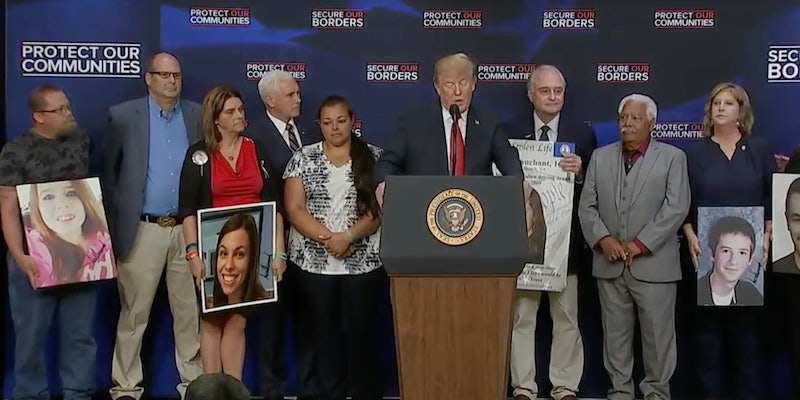 People said the gesture was tacky.

President Donald Trump apparently scrawled his signature on photos of young people whose deaths were highlighted at the White House’s “Angel Families” event on Tuesday.

The event featured families of people who were killed by undocumented immigrants, CNBC reports. The families held up 11 photos of deceased loved ones, all with Trump’s signature.

People on Twitter debated about the symbolism of the gesture. According to CNBC, it’s unknown if the families requested Trump’s autograph, when he signed them, or if the photos were provided by the White House.

But regardless of how the autographs came to be, people said the White House event was positioned to push Trump’s inaccurate claims about undocumented immigrants—and that the autographs on the photos were gaudy.

Obama cried when sharing the stage of grieving parents who lost their kids to violence.

Andrew Kirell, a senior editor at the Daily Beast, pointed to research debunking correlations between immigrants and crime.

And I’ve got people suggesting maybe they asked for the autographs. Possible. But the underlying point is that Trump—prone to tacky manipulations—is using these families to advance completely false claims about immigrants and violent crime: https://t.co/pgebPZdpQz

Trump, who on Wednesday signed an executive order ending his administration’s vigilant enforcement of a policy separating immigrant children from parents, said the victims highlighted at the event were “permanently separated” from their families.

“Where is the media outrage over the catch-and-release policies that allow deadly drugs to flow into our country?” Trump said, according to the Hill. “Where is the condemnation of the Democrats’ sanctuary cities that release violent criminals into our communities?”