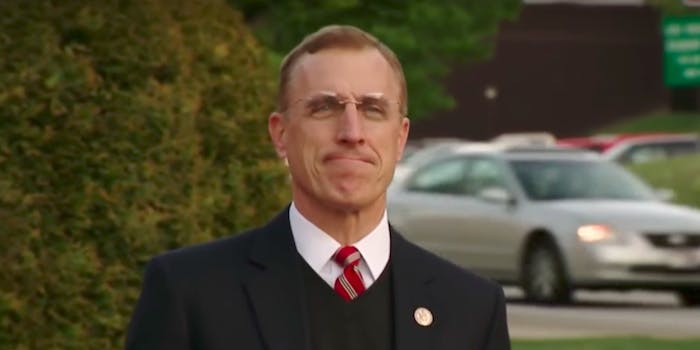 Anti-abortion groups hailed Murphy as a champion for their cause.

Conservative Pennsylvania Rep. Tim Murphy (R) announced on Thursday he will resign from Congress later this month following the revelation that he allegedly urged a mistress to get an abortion despite being a prominent anti-abortion supporter.

Murphy’s resignation from the House of Representatives will be effective Oct. 21. He had previously said he would not seek reelection and would serve out the rest of his term.

“It was Dr. Murphy’s decision to move on to the next chapter of his life, and I support it,” Ryan said in a statement. “We thank him for his many years of tireless work on mental health issues here in Congress and his service to the country as a naval reserve officer.”

The Pittsburgh Post-Gazette first reported on Murphy’s affair and showed that he received a text from Dr. Shannon Edwards about him urging her to have an abortion the day before he posted a long Facebook statement about his opposition to late-term abortions.

“And you have zero issue posting your pro-life stance all over the place when you had no issue asking me to abort our unborn child just last week when we thought that was one of the options,” Edwards wrote.

Just hours after the Post-Gazette broke the news of his affair and alleged attempt to coerce a woman into having an abortion, Murphy on Wednesday voted in favor of a bill that would ban most women who have been pregnant at least 20 weeks from receiving abortion procedures.