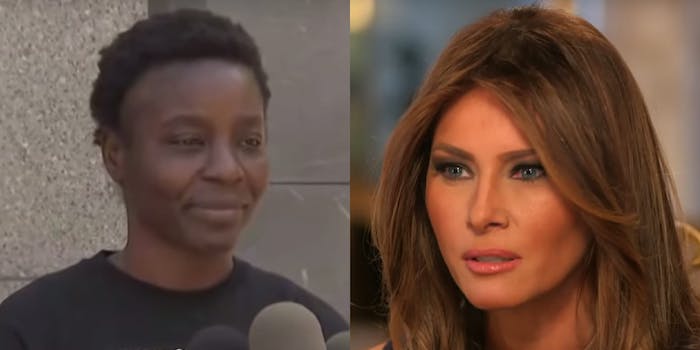 The woman who was praised by the internet because she climbed the base of the Statue of Liberty on July 4 to protest the Trump administration’s “zero-tolerance” immigration policy found a fashion-forward way to protest on her way to court.

The protester, Therese Patricia Okoumou, arrived to her court appearance on Friday wearing a green dress that on the back said, “I REALLY CARE, WHY WON’T U?” and “BE BEST.”

The dress is clearly inspired by Melania Trump’s infamous green “I REALLY DON’T CARE, DO U?” jacket, which the first lady wore on her way to visit a detention center for immigrant children in Texas. The second line on Okoumou’s dress refers to an online safety initiative Trump launched (and possibly stole materials for).

Patricia Okoumou (@POkoumou) went to her court hearing trolling Melania Trump with a “Be Best” dress. WHAT AN ICON. pic.twitter.com/chHdCR8v4X

The Cut reports that after her court hearing, Okoumou discussed resistance politics and led the crowd in a protest chant that went like this: “America, you motherfuckers, you drug addicts, you KKK, you fascist U.S.A.”

Okoumou is pleading not guilty to trespassing among other charges for the Statue of Liberty protest.