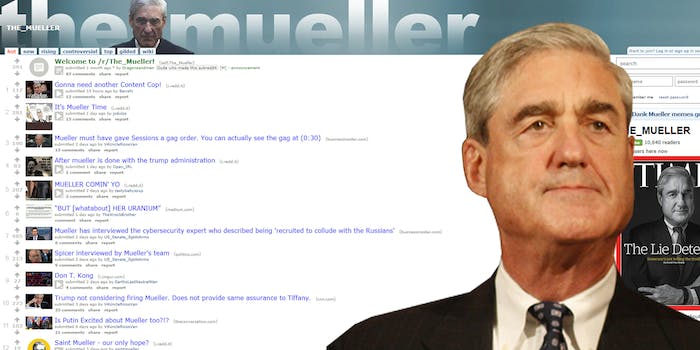 Meet The_Mueller, the Reddit community mocking Trump fans one meme at a time

Yep, the name is close to another (quite popular) pro-Trump subreddit.

There’s already a notorious subreddit that houses President Donald Trump’s most ardent online supporters, The_Donald. But a new one has cropped up that may become its biggest foil: The_Mueller.

Yep, there is now a subreddit dedicated to Robert Mueller, special counsel for the Justice Department, who is leading the sprawling investigation into Russia’s interference in the 2016 presidential election, potential ties between Trump’s campaign and the country, and other related matters.

While The_Mueller is nowhere near the size of The_Donald, the idea of creating a subreddit glorifying a political figure in the same vein as the extremely vocal pro-Trump Reddit community has caught the attention of more than 10,000 users.

The community describes itself as “a place for memes and silly posts about the Special Counsel Robert Mueller, and his investigation into possible ties the Trump campaign has with the Russian government.”

The subreddit is a mix of memes using pictures of Mueller, links to news regarding his investigation into Russian interference, and a slew of other anti-Trump posts.

The top posts as of Friday afternoon were several memes involving Mueller—including one in which a cartoon version of the special counsel is holder a “Mueller” beer saying “America, it’s Mueller Time! Here’s to getting to the bottom of Russiagate.” Another popular post includes a photo of Mueller with a yellow halo around his head, with the title “Saint Mueller–our only hope?”

The memes aspect of the subreddit is meant to be “silly,” according to the rules of the community, but some news articles come through fairly regularly.

In recent days, submitted posts from subscribers of The_Muller have included Attorney General Jeff Sessions saying he has not interviewed with Mueller’s team as part of the Russia probe and the news that former White House Press Secretary Sean Spicer was expected to interview with them.

Oh—it’s no coincidence that the name of the community is similar to the The_Donald.

“Trump supporters won’t be banned on sight. Unlike a certain similarly named subreddit, dissent is tolerated,” the subreddit’s rules read. “Just don’t break the rules in your dissenting.”

You can check out The_Mueller here.