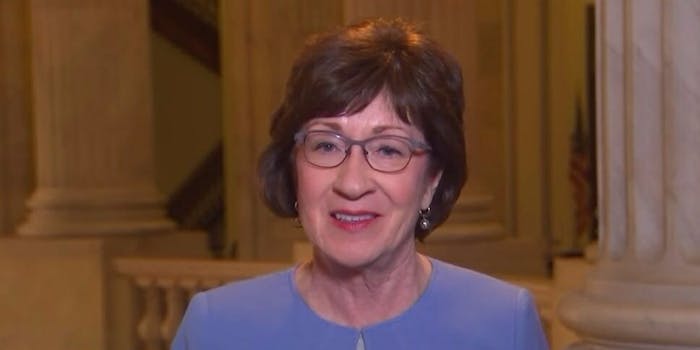 With the fate of critical Supreme Court rulings up in the air following Justice Anthony Kennedy’s retirement announcement last week, Republican Sen. Susan Collins told ABC that any nominee who would overturn Roe v Wade would “not be acceptable.”

Collins, from Maine, has said she considers the most important factor for a Supreme Court nominee to be “respect for precedent.”

Collins said she met with President Donald Trump to discuss his list of potential nominees and her requirements for endorsement. Among Collins’ most important traits are judicial temperament, intellect, fidelity to the rule of law, and “most important of all, respect for precedent,” she said Sunday on ABC’s This Week.

She also told CNN’s State of the Union, “I would not support a nominee who demonstrated hostility to Roe v Wade.”

Collins also added on This Week that any judge who makes attempts to overturn the legislation that affirmed a woman’s right to an abortion has an “activist agenda” that she believes goes against established tenets of U.S. law.

“A discussion of precedent, however, is very important,” Collins said. “What I want to see is a nominee who, regardless of his or her personal views on the very difficult and contentious life issue, is going to respect precedent, regardless.”

Trump issued a list of 25 potential nominees for the seat left vacant by Kennedy. Collins says she has urged President Trump to expand the list.

Perhaps somewhat ironically, Collins has also stated that “it would be inappropriate” to ask a Supreme Court nominee how they would vote on future legislation.

Supreme Court nominees must be confirmed by a majority in the United States Senate. Republicans have 51 votes, meaning that two nay votes would automatically sink a candidate unless a Democrat voted to align with Republicans.

Collins and Republican Sen. Lisa Murkowski of Alaska are widely considered to be the two most pivotal swing votes in the upcoming nomination process. Both have a history of voting against the rest of their party on specific issues like healthcare and abortion.

A Justice that votes more conservatively than Kennedy has the potential to upend decades of critical legislation. Read how four 5-4 Supreme Court rulings from this past week could reshape American society.