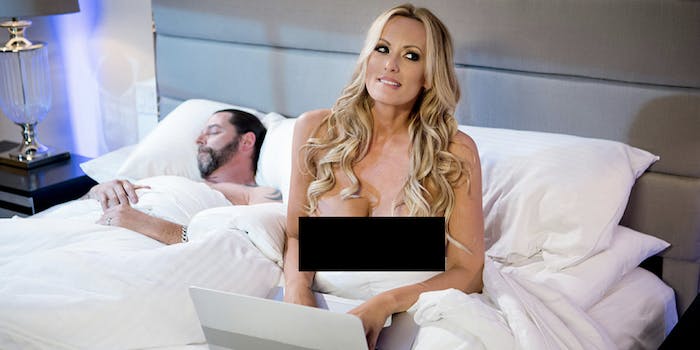 Adult film actress Stormy Daniels has been in the news since the Wall Street Journal revealed she received $130,000 in hush money from President Donald Trump‘s lawyer over their alleged affair. She has also gained great attention for her lawsuit against the president and his lawyer over making her sign the non-disclosure agreement and for refusing to let them silence her.

Now, she’s returned to work, in her first new movie since being in the national spotlight.

Since it was uploaded two days ago, it’s already received over 160,000 views, which, according to TMZ, blows away the views other new videos have gotten on the site this week.

You can watch the not-safe-for-work (although really, since it’s tangentially relevant to America’s political climate right now, it may be safe for work?) pornography here. You can also watch the (extremely) NSFW trailer here.